A couple of years ago, I met up with an antiques dealer from Syracuse, and he told me about these "paint samples," that he had from the Syroco factory. We worked out a deal, and I took them all.

What they were was the heads from syroco corkscrews and openers without the hardware attached. Instead, they all had little tags tied on, and each had a sku / catalog number. These came from a former worker’s estate, and one–which happened to be the codger–had a number that matched a catalog that was already in my possession.

I knew of another collector who would find these interesting, and passed them along. I kind of regretted it, as I only took a couple of pictures.

Well, as luck would have it the daughter of one of the carvers of syroco contacted me the other day, and offered me a couple more of these. And, she is getting me all kinds of information about the company as well.

These are definitely syroco, and what they were intended for is still a mystery. But, i do believe them to be a sample of some sort that the factory would have kept–until some employee took them home : ) 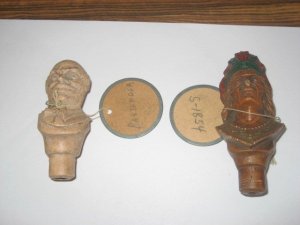 This pair (there is a third one she is still looking for in her house) will definitely be staying in the collection. The indian is cool, but the other, simply marked "bartender" on the tag is even cooler! It would seem this would have been a piece that never got out into the public, as it doesn’t appear in their catalogs, and I have never seen another. Have any of you?