In London, Fletcher Wallis mentioned that he had secured a "quarterly worme" blog spot, and it would be soon up and running.

And, now it is–check it out by clicking the link;

"The Quarterly Worme: An Unofficial Experimental Blog for the Canadian Corkscrew Collectors Club"

I personally find the "unofficial experimental" portion of the title hilarious : )

We are back on Vinalhaven for a few days before we head back out on another adventure.

As mentioned previously, the time spent with John and Martha was great!!! Their cabin IS fabulous!!! 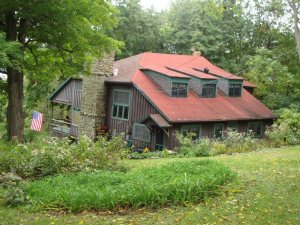 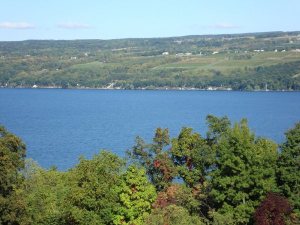 And, in between the wine, and food, and conversation topics that ran the gamut, we did talk a little about corkscrews : )

John and I compared recent finds from "the back of O’Leary," and even worked out a trade!!! 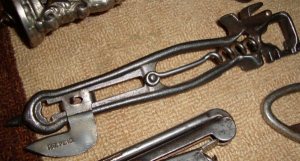 Those are both of John’s recent finds…

The trade will be an interesting one however. It seems that I have two of the same type of corkscrew, although one has gone missing. John has a fantastic American patent corkscrew which he has also misplaced. So, the deal is this. When I find my second one, and he finds his we will complete the deal. It may take months (or years) to find said misplaced corkscrews, but when it happens the deal will be done : )

Definitely a great time; friends, wine, apples, corkscrews, and even an antique store or two…

The great-finger-lakes-wine-tasting-corkscrew-hunting-adventure continues. It has been a fantastic time thus far, and John and Martha’s "cabin" is breathtaking.

Tons of pictures have been taken, and many will be posted upon our return to Maine. And, perhaps a corkscrew or two will be traded over the next day or so. News of any deals to follow!

The lovely bride and I are heading off island for a road trip for the next couple of days. Vermont by this evening, where perhaps there are one or two corkscrews amongst the apple cider doughnuts and changing leaves. And, the next day into New York where we will spend a couple of days with John and Martha Morris. It will make for a great adventure! Pictures to follow!

On a corkscrew note, the corkscrew mentioned/pictured yesterday was also offered to Peter. It seems like the guy is making the rounds. Hopefully one of us will end up with it.

News of our adventures, and any corkscrew finds to follow!

It seems as though my days are spent continuously tearing apart the vault at "32 Main," and for some reason no corkscrews have been found.

So, imagine my surprise and delight yesterday when this suddenly turned up: 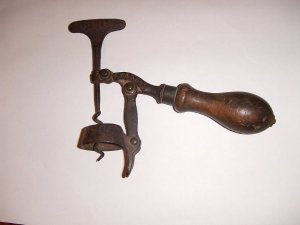 Unfortunately, it only arrived in my email box. However, I have made an offer to buy it. We shall see if the same picture was sent to Peter, Chris, Don, and the other usual suspects.

Yes, I offered more than 5 dollars.

The other day, Phil (our neighbor), asked if we would like to join a small group going to Nebo Lodge for dinner. Having had a fabulous time our last time there, we readily agreed.

So, yesterday we all climbed into a van, and drove to the end of North Haven Road. Where we ran into a couple more Vinalhaven folk who would be joining us.

After a couple of minutes, a small skiff arrived, and 5 of the 10 of us, were shuttled across. 10 more minutes, and it was our turn.

As it happened, the lovely sister in law (and two of her friends) were also going to be dining at Nebo that night. And, we saw them walking up to the restaurant. And, shortly after being seated, another group of Vinalhaven folk wandered in.

Given the size of the island upon which we live, we actually had a fair percentage of the population celebrating, toasting, commiserating, indulging, and consuming large amounts of oysters–it is oyster week after all!

It was a fabulous meal, with great company and conversation. And, after a quick boat ride back to the end of North Haven road, followed by a cozy van ride back to "…Carver street and surrounding outside environs…" we were all back home.

This morning, we hopped the morning boat, 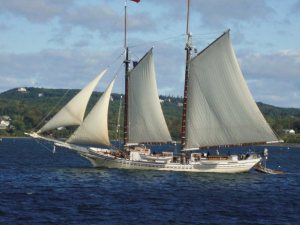 and headed across to the mainland for a couple of appointments, a drive down the coast, a visit to Montsweag Flea Market, and a drive back up the coast, followed by the afternoon boat. 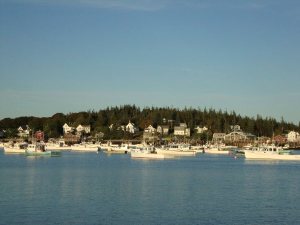 No corkscrews were found at Montsweag, but maybe next time!

On that note, today is talk like a pirate day. And, so it is with a hearty ARRRRRRRRRRRRRRRRRRRRGH! I sign off until tomorrow.

Well the bricks are continuing to come down. And, while the first night of "vault demolition" consisted of hammer and chisel, yesterday there were some other implements of destruction added to the mix (courtesy of Don Bull): 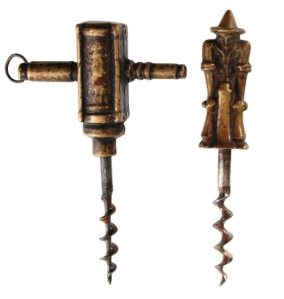 They didn’t actually help with the bricks, but the vault is slowly coming down! 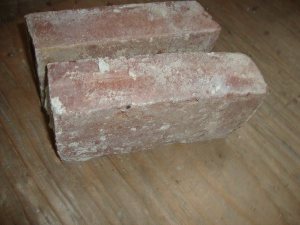 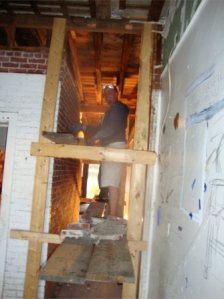 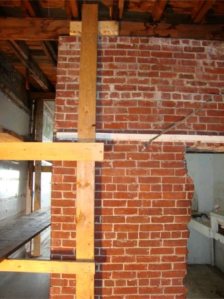 No corkscrews were found inside the vault…but there are still bricks to go–several thousand of them. Pictures of the vault, the bricks, and the process to follow. Stay tuned.

Until then, I am looking for a pneumatic jack hammer to facilitate the process. Anyone have one to spare?

I listed several items yesterday, and received an email via eBay asking if I would add a buy it now to the item. The item of desire; the miniature barrel knife. And, the email read as follows:

"Hi, do you have a buy it now price in mind for this knife? I collect miniature knives. I have an unusual cork screw, maybe a trade for knife? Thanks…"

The idea of an unusual corkscrew was intriguing, until the photo arrived. Not unusual, and not one that needs to be added to the collection. 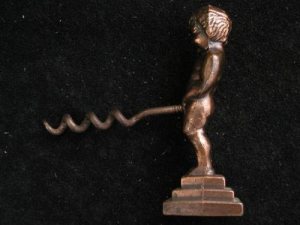 So, it looks like the knife will be going the distance. Unless, of course, someone has an unusual and desirable corkscrew to offer in trade : )

Well, it has been a whirlwind. Yesterday, Mark and I headed down to Brimfield together, and did manage to pick up several corkscrews; an interesting (and possibly rare) variation of the 1885 Haff Patent, a Tusk with Sterling ends and rivets (marked for John Hasselbring), an interesting direct pull, and an alligator sheath corkscrew. 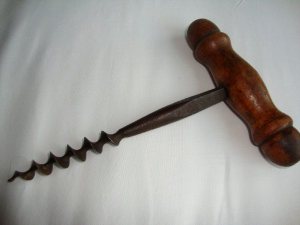 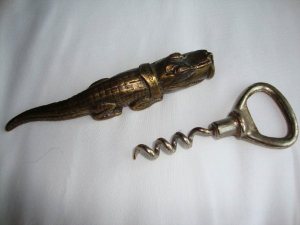 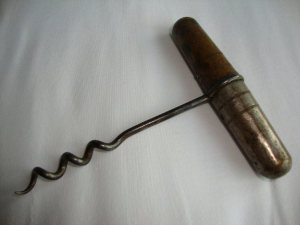 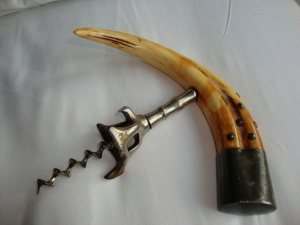 The Haff piece is interesting as it has a handle that looks similar to the Williamson roundlet, but is clearly pinned on either side of the handle, and does not have any patent information on the ends as a Williamson would have. That said, it is not the typical metal handled patent as the ends are rounded. An interesting variation–more on this as I do research.

The lovely arrived in town last night, and Mark, Sue and I went to Kouzina for dinner–YUM!

This morning, we all headed down for day three. And, whilst walking the fields corkscrews were there to be found. Shortly after hitting the second aisle of booths, I picked up an Anheuser Busch Knife–missing the stanhope : ) 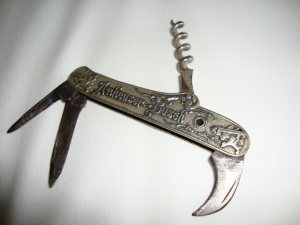 And, within seconds an interesting bakelite german thing. 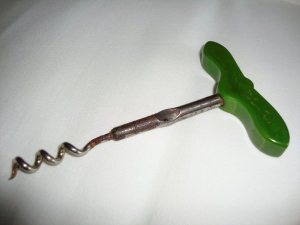 We also ran into Andre, and said hello. And, shortly thereafter the lovely picked up a couple of corkscrews–not from Andre. A flash and a sterling sheath. 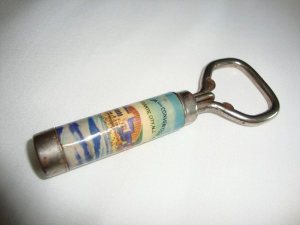 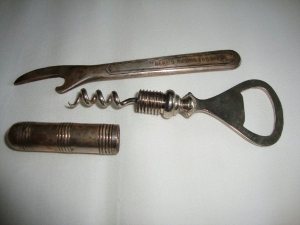 All in all, a great three days! 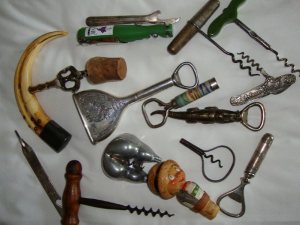 On a side note. When Mark and I first got here, we headed to the bar and struck up conversation with the bartender "Mike." We talked about hitting Brimfield looking for corkscrews, and he mentioned that he collected cocktail shakers–an appropriate collectible given his profession. So, we mentioned the napier miniature shaker, and told him we would try and find one for him. So by day two, one was discovered, and Mark and I did try and present it to him over the last couple of days–but he was not working. So, today, over a couple of glasses of wine, the lovely and I gave him the shaker, as Mark had already started the drive home. Mike was thrilled. I think he couldn’t believe that we would actually find the shaker, let alone simply give it to him. He definitely was a happy collector/bartender. 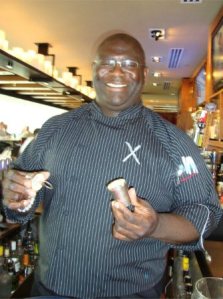 We head back to Maine in the morning. More corkscrew and other news to follow!