A friend is divesting themselves of a lovely vintage Taxco jewelry collection, and I am helping them out. And, while the blog is generally about corkscrews, this stuff is so awesome, I just had to post it here. 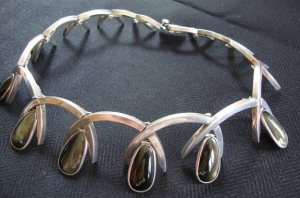 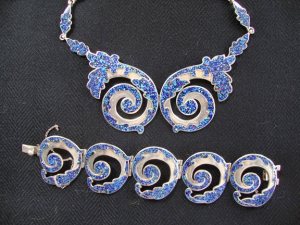 There was a fantastic henshall button Frary corkscrew that ended yesterday. And, I had been watching it for the entire week it was listed.

Not, that I didn’t do anything else this week but watch the corkscrew, but I was keeping an eye on it.

And, had I not been keeping an eye on it, there were others who were watching it for me. Email reminders from various collectors around the world, were updating me on the current bid, that it was ending soon, and making sure that I was on top of the auction.

It pays to have friends out there!

I had already placed a snipe midweek, and saw that the current bid was above that. I had to think, how much is this thing really worth to me, and what will win it.

The very tip of the corkscrew is missing, so that tempered my enthusiasm a bit. Still, it is pretty cool. I adjusted my snipe bid, and waited.

Actually, I didn’t wait. I just went about my business, mowing the lawn, running errands, and the like. And, happened to sit down at the computer with 3 minutes to go. The high bid was several hundred below my snipe, and I hoped for the best. With 7 seconds to go, it was still hovering below my snipe, and then at 5 seconds the price shot up.

And, for those that have emailed asking. No… I didn’t get it!

No, this one went to our Romanian friend whose pockets are deep! Really Deep! The Frary went for 1200+ dollars! And, no, I wasn’t the underbidder. Whoever that was, also was in the 1200 range. No, I wasn’t even in the ballpark. Heck, I wasn’t even near the "pass out gate." (that was a Candlestick Park reference for those of you who are Giant’s fans).

After a few emails and phone calls of shock and disbelief over the selling price, it is back to hunting for other corkscrews. Eventually, I will find one of these little guys, and hopefully the price will be significantly lower.

Whilst exchanging emails with the usual suspects regarding the most recent Frary discovery, a gentleman from Iowa dropped me an email, asking if I would be interested in a Syroco Chief…

Well, how could I say no…

Details were hammered out, and the Chief will soon be heading to Vinalhaven

Okay, so I will have to confess, I have thumbed through the Kenneth Cope book on kitchen collectibles many many many times. And, I am prone to study the pages which feature corkscrews–which there are a bunch.

And, of course, I tend to return to the pages which feature James D. Frary corkscrews repeatedly.

This morning however, I noticed an image of a Frary Lemon Squeezer for the first time, and suddenly it dawned on me. The ribbed handled direct pull that is often thought of as a Williamson/Barnes is not a Williamson at all. Nor is it a knock off of the Barnes patent. Instead the shape of the handle is identical to that on the Frary Lemon Squeezer.

At first, I thought it was merely coincidence, and then I compared the ribbed handled corkscrew to that of a known Frary corkscrew. 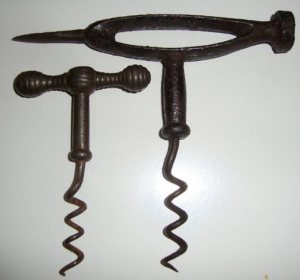 The worm, the shank, it is simply too similar not to have been produced by the same company. And, now with the catalog image from K. Cope’s book, it seems the corkscrew has been misidentified. And, it is instead a Frary corkscrew.

The birthday festivities were fabulous! After a boat ride to the mainland, the lovely and I headed to lunch at Amalfi overlooking the harbor, then it was off to Samoset for a little driving range time.

After the driving range, we got ready for dinner and headed to Primo for dinner. Yum! Just before heading out for dinner, the lovely presented me with a fantastic b-day gift; cufflinks with a corkscrew motif she had a local glass artist make for me. They are awesome.

The next morning was golf, and the course is fabulous. Water everywhere. Most of the course overlooks the Rockland Harbor, or Vinalhaven off in the distance. 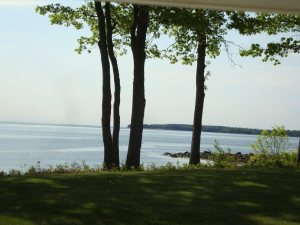 After golf, we headed up the coast and did a little antiquing along the way. We ended up in Bar Harbor for the night. The next morning we made the drive back down, and hopped on the boat. It was a great weekend, and there were corkscrews involved. Whilst in Bar Harbor, we happened upon a small farmer’s market. And, in conversation one of the girls selling bread mentioned she too collected antique corkscrews.

Really? I suggested she drop me a line, and I will send her CCCC info (and possibly Tommy’s phone number) if she contacts me.

Upon getting back to the island, there was a corkscrew waiting at the p.o. box. The Frary Giant arrived.

(for all those wondering, it isn’t really a giant corkscrew, more or less a normal size).

the lovely and I are headed off island for a little b-day celebration (mine). Primo for dinner tonight, and then golfing at Samoset tomorrow.

News of the birthday adventures upon our return!

Ever since the Williamsburg ICCA meeting, I have been hot on the trail of corkscrews made by James Frary. And, the collection is coming together fairly (or Frarily) well. The bar screws remain rather illusive (and rather expensive) not that the others are easy to find.

However, after a few conversations, some searching and re-searching, and a couple of trades the collection continues to grow. And, yesterday, a deal was made for one of the more difficult ones to find; the Frary Giant Self-Extracting corkscrew.

Not that it is really giant, but that is what it is called in Kenneth Cope’s book on Kitchen Collectibles. 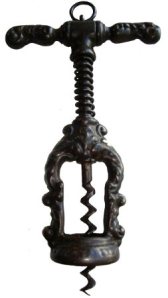 Of course, there are others I am still after–so feel free to email pictures if you have any with which you wish to part. And, you can see the updated Frary Page here.

Okay, I didn’t score. In fact, I missed entirely!

Yet again, I placed a snipe bid on a rare corkscrew, only to be outbid.

And, so… a Tucker patent is heading someone other than the island. Perhaps next time!

The most recent acquisition!

The picture below is the view from the "corkscrew room" in our new home! We close on it at the end of June, and shortly thereafter will start a bit of renovation, and soon enough will have corkscrews in the corkscrew room.

We left Brimfield on Thursday, dropped Tommy off at the Airport, and headed towards Maine. The final field for us at Brimfield was nice, and a couple of finds were there to be had. However, there was one dealer that still leaves me baffled.

I meandered around, and stopped by the dealer’s booth. And, asked if he had any corkscrews. He said he did, that he had recently purchased a small collection, and they were in his truck–which was behind him. However, he also explained that he didn’t feel like digging them out at the moment.

I said I would come back later, and see if he had gotten to them. I searched the rest of the field, purchasing this and that, and went back to the aforementioned dealer. He had a similar response when I asked again. I explained that there were at least half a dozen corkscrew collectors walking the field, and he could make a fair amount of money depending on what was in the collection. He explained his space was limited as was his time.

You take the time to come to Brimfield. You have a truck that looks to have 6 boxes in the back of it, and you have buyer in front of you (if not others) who is willing to give you money for what is in the box, and you don’t want to turn around and pull it out for them. Isn’t selling the point of going to Brimfield if you are a dealer?

Really… he wouldn’t retrieve the box.

That all said, given the find from the previous day, I decided not to wrestle him to the ground whilst another collector grabbed the box and rifled through it looking for treasured openers. I am sure that would have been frowned upon.

Even without the box being retrieved, it was a fabulous few days meandering around looking for corkscrews, sharing corkscrews stories and finds, and hanging with the boys.

More Brimfield pictures later, as well as pictures of a couple of other purchases…