A couple of moments ago, the lovely personal trainer told me there was a voicemail for me–which must have come through while we were at a meeting last night.

“That BIN was mine. You owe me!” followed by a somewhat sinister chuckle.

Okay…so, now we–or at least I–know who it was that had requested the Buy it Now on the Williamson Roundlets.

The voicemailing-binner’s identity will be kept in confidence…

Yesterday, an interesting lot turned up on eBay. It had a 20 dollar opening price, and pictured on the listing were two Williamson Bottle Roundlets with advertising.

In the seller’s listing they described them as having advertisements for Cunninghams and Christian Kolb. However, the picture was pretty blurry, and one couldn’t make out the actual advertisements. And, she didn’t actually show the corkscrews themselves, just the closed roundlets.

I threw it on my watch list, and went about my business. A bit later, I was went back to look to see if better pictures had been added, and the listing was gone. Ended.

And, then, it reappeared. With a Buy it Now.

The previously listing ended at 2:47 West Coast Time, and then was relisted at 2:54 where it sat for about 20 minutes…

With the poor photo, lacking actual pictures of the helixes themselves, I stared and contemplated. Surely someone asked for the buy it now, was it worth the gamble that they are in good shape?

Were other collectors having the same contemplative moment? 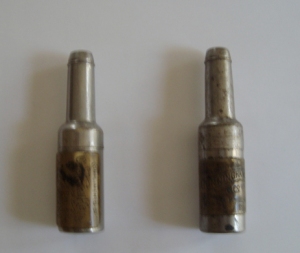 I went ahead and clicked the button. Might as well go for it.

With the Cunningham’s bottle roundlet, I knew what the badge should look like…

After a little research however, I haven’t been able to find an example of the Christian Kolb, Allegheny bottle roundlet. It doesn’t appear on Don Bull’s Roundlet list Nor, does it appear in Ken Hark’s article on Williamson Bottle Roundlets

That is quite the title of a book…just rolls off the tongue, but I digress.

It remains to be seen if the helixes are complete, on these two little roundlets, and if the gamble was worth it.

But, I will report back when they arrive! Do any of you have a Christian Kolb Williamson Roundlet?