Eight years ago, I purchased a corkscrew on ebay that was advertised as a corkscrew / ring / tamper. And, after receiving the corkscrew, I went to remove the sheath only to find it glued together–well, kind of glued together as the glue didn’t hold.

When I emailed the seller, asking as to why he advertised it as a corkscrew when there was no corkscrew present. He explained that, “…nearly everyone” on eBay UK was a detectorist, and that these were dug items, and dug items rust. 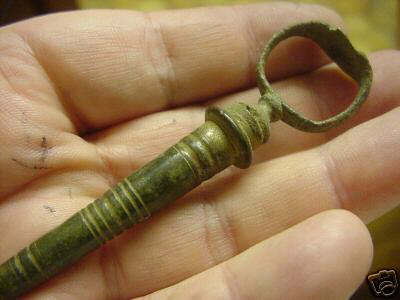 Not the most pleasant of interactions as the seller was appalled that I was unhappy with my glued-together-rusted-corkscrew-less-corkscrew, however, eventually he reluctantly refunded my paypal.

Yesterday, it seems there is a return of the detectorists, as a Nice Georgian Ring / Tamper / Corkscrew / Seal Combination Tool was listed.

The seller explains in his listing explains, “I have not tried to open the corkscrew as this item has been excavated.”

Could the corkscrew have survived being lost, buried, detectorist-ed, and excavated?

Is the corkscrew worth a bid?