Over the last few years, Peter has been running this lark of a contest, where corkscrews that are purchased on eBay with a buy it now are tallied, and whomever secures the most, gets awarded a trophy; much more coveted than say, the Ryder Cup, or the America’s Cup, and certainly more desirable than the Stanley Cup.  The contest, while all in good fun, is actually much contested.  And, those that take part, often get their hopes dashed, when the contest committee, deems their appropriated BIN as not worthy.

Yes, there are rules.

In essence, one needs to acquire a corkscrew via the Buy it Now option on eBay, but the price of said corkscrew needs to be less than half of the true value of the corkscrew, and the corkscrew needs to be at least worth 50 dollars.  The Buy it Now can be asked for, or it can be original to the item.  And, truth be told, those that are original to the item are much easier to get, as it is pretty much guaranteed that if a nice corkscrew comes up, there are those that are sending messages asking for a buy it now price–both those within the contest, and countless others.  And, you know who you are  : )

For me, I personally like the unsolicited BIN.  Someone finds a corkscrew, decides what their price is, and whacks it on eBay with a Buy it Now–or better still, Buy it Now or Best Offer.

We are into the contest for all of about 21 hours, and so far nothing has been put forth by the usual suspects.  Not for a lack of trying, I have no doubt.

A few moments ago, while I was wrapping up some teaching duties, I happened to check eBay, and what should appear but a corkscrew with a whopping Buy it Now price of 15.99.   As mentioned above, I greatly appreciate the seller who determines their price, and whacks it online.  It would seem the early bird gets the worm (or helix as it were).

I am pretty sure this will meet the committee’s parameters . 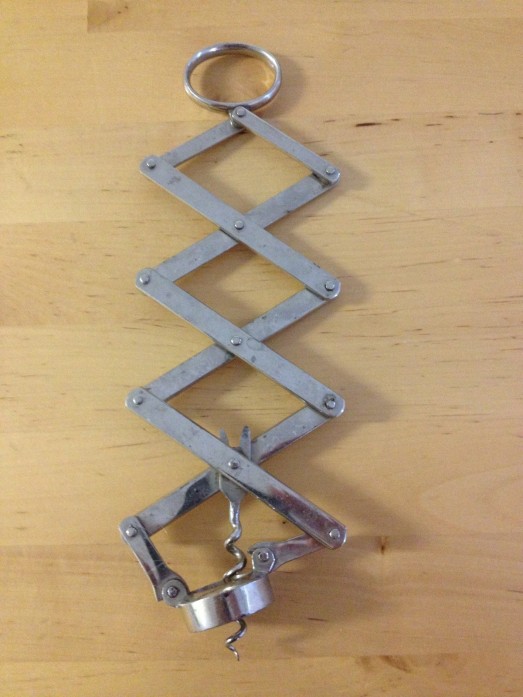 Of course, as mentioned above, the contest is just for fun, and given we will be traveling the next two weeks in Europe, I am sure the trophy will end up in Peter’s, Tommy’s, or Gav’s trophy case.

btw:  If you look really really closely at the corkscrew trophy, you will see the past winners’ names:

Who will find their name emblazoned across the trophy this year.  My money is on Tommy!