I will have to admit, that the evening before (and sometimes several days before) Brimfield, my mind races a bit. What might turn up? What will be found? Will that great corkscrew find be mine?

And, this year was no different. Instead of getting a good night’s sleep in anticipation of an early wake up call, I was wide awake late last night wondering what corkscrew treasures might present themselves the following morning.

Fortunately, and at the lovely bride’s suggestion, I brought our espresso machine with me, and it made the early morning (3 am) a little more acceptable.

After a shower and a couple of espressos (three actually) I was in the mini and heading towards Brimfield. It was early–still dark–and I was one of the first cars in the parking lot. There were other early risers out there, but few dealers were amongst them. So, the first 30 minutes or so, really consisted of meandering around, and hunting for more coffee rather than corkscrews.

After another cup of coffee, and feeling fairly awake, I walked into a booth and found a nice faceted bow. The price was reasonable (25 dollars) but given the dealer didn’t have change when I offered two twenties, the price became twenty.

I meandered this particular field a bit longer, and then looking at my watch realized that a dealer that historically has corkscrews would soon be opening his booth. I headed back towards his vicinity. As he was yet to arrive, I crossed the street and went about looking…for corkscrews.

One dealer remarked, “Corkscrews? I could have used one of those last night.” I asked if he ended up finding one, and he went about explaining that that the cork in his cognac bottle broke off, and he was left looking for a corkscrew in desperation. I told him that I would find him one. He smiled, and told me to have a good day.

A few more booths down the aisle, I did find a bakelite handled corkscrew with bell assist. It had some finish loss, but it was in working order. I asked the dealer how much, and he explained that it would be ten dollars. I asked him if he would do five, and continued to tell him about his neighboring dealer’s dilemma. He dropped the price to 5; I paid up, and told him where the dealer was, figuring he might partake in the aforementioned cognac tonight.

After a few more booths, I happened into one, and saw a small grouping of Cloughs and Cloughs with sheaths. I examined them looking for some interesting advertising, and got more than I bargained for.

I looked at one sheath closely, and then looked again.

The booth was a little dark, but this clearly wasn’t a normal Clough corkscrew.

In fact, it wasn’t a Clough at all.

The opposite end of where the corkscrew is inserted wasn’t solid. It was indeed hollow.

I grabbed the corkscrew, and set it aside, and checked the others. Satisfied that the others weren’t of similar manufacture, I spoke with the dealer and handed over the asking price.

That said, as the booth was rather dark, I couldn’t really make out the end of the sheath, and only after getting back into the daylight did I get to find what I had hoped. Inside the hollow end of the sheath was a little spike.

This was indeed not a common Clough corkscrew with advertising, instead it was a A.W. Stephens patent–not common at all, and actually a piece that is rare enough that this could make my best 6 of the year!

The advertisement on the sheath is for “John the Shoeman, 184 Mathewson St., PROVIDENCE R.I., and on the reverse side of the sheath it also carries the patent date for A.W. Stephens patent; June 2, 1908! 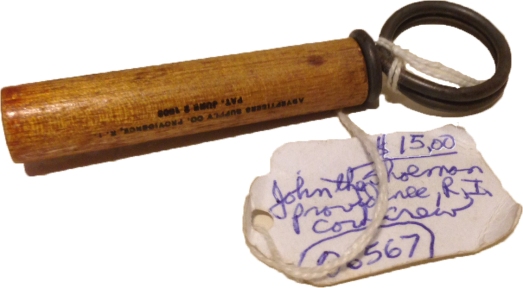 With the advertising in excellent shape, and the corkscrew in fantastic shape, I had a certain spring in my step when I went back to the dealer who was having issues with his cognac bottle. I walked up to him, and handed him the bakelite handled corkscrew.

He was definitely surprised, and after picking his jaw up off the ground, he asked me what he owed me. I told him that it cost me 5 bucks, and he reached into his bankroll and paid me for the corkscrew.

As I headed to the next aisle of booths, he was telling his girlfriend/wife that he had a corkscrew, “…and, a cool one too!”

Having righted that wrong, and with the A.W. Stephens still firmly in my grasp, I hit a few more booths, and then headed to the dealer that usually has some stuff. He did indeed have some interesting little direct pulls, and after a bit of negotiations, I picked up an interesting t-pull.

After running into BT shortly thereafter, we discussed the day’s find thus far, and proceeded to hit a few fields together; picking up Noyes patent here, or a (possibly) Sterling roundlet there.

The day’s final field had a few corkscrews, but few corkscrew worth buying. Still, with the A.W. Stephens find, I am quite pleased with day 1.