A couple of weeks ago, a non-ebay auction was advertised, and within the myriad of items to be auctioned off, a collection of corkscrews were to be part of the auction.  With a poor picture to go with, I made contact with the auctioneer, who explained that I should call him the week of the auction, and so I put it on my calendar to make contact.

He answered his phone, but suggested that I call him on Wednesday between 9 and 11 am.  I agreed, and on Wednesday at 10 am, he called me.

We spoke a bit about the auction, and the lot.   And, he explained there were 18 corkscrews, although the picture from his auction site only showed 8.

I asked him if he would shoot a couple of pictures and text them to me.

Of the 18, there were only two that I was after, and it was the same two that I had seen in the original 8 that prompted me to contact him.

He explained that he would be auctioning this off as “choice.”  I kind of knew what that meant, but I asked for clarification.  He went on to explain that he would hold up the entire tray of corkscrews, and say you are bidding on the single corkscrew of your choice.  Whoever was the highest bidder, would grab a corkscrew from the tray, and then the auction would begin again for the next choice.  And, so forth…

Knowing that I wanted first choice, and most likely second choice, I needed to place an absentee bid that would be high enough to keep the other bidders at bay, but also not too high to signal that this was a really good corkscrew…

I hemmed and hawed a couple of moments, and told him my numbers.

He told me he would call me on the evening of the auction with the results, and then proceeded to tell me about another corkscrew which will be up for bidding in the next auction.  As he described it to me, I told him I would be interested in that one too.  No bids have been placed yet, but I have his cell number on speed dial : )

This evening. I did have a phone conversation with the auctioneer, and it seems that I did get the first choice.  And, I did get the second choice.  And, it may have well happened, that I could have had the third, fourth, fifth, sixth, seventh, eighth, ninth, tenth, eleventh, twelfth, thirteenth, fourteenth, fifteenth, sixteenth, and seventeenth choice in the auction, but it was only two that I really wanted.

And, truth be told, it is was only that first choice that was the must have, must bid, must win corkscrew.

The Hiram Codd patent of 1881, marked Codd’s Patent” and “GF Hipkins & Son” was the first choice.  And, the celluloid Indian was the second choice. 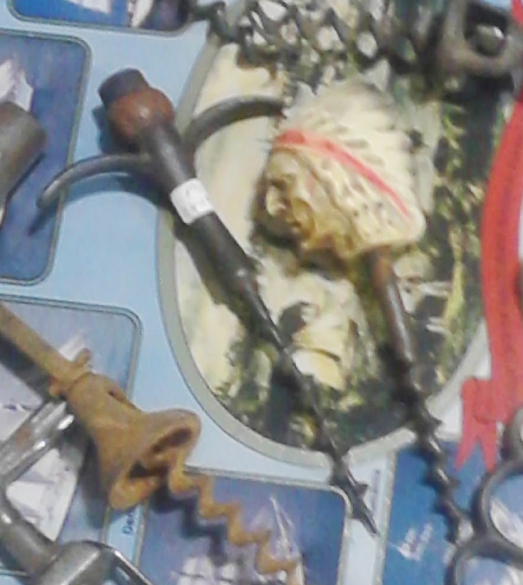 I don’t remember ever seeing this version of the Codd Patent for sale.  I know that the folding example made the ICCAuction sometime ago, and it brought a fair chunk of change.   And, that went for a bit more than I would have wanted to spend, and significantly more than what winning first choice cost me :  )

A very nice corkscrew to add to the collection.

And, a best 6 candidate?