It suffices to say that my collection of Williamson Flash corkscrews pales in comparison to Tommy’s collection. I don’t rightly know what the current count is, but I am guessing he is nearing 1,000 variations. And, if he isn’t there yet, it will only be a matter of time.

If you would like to read the article on the Williamson Flash corkscrew that he and I put together last year, you can link to it at the The-ICCA.net library. Or, simply click here.

And, while I do have a dozen or so flashes, and I do pick them up when I find them, I usually hand them off to Tommy if they are one he doesn’t have.

That said, moments ago, I happened upon another flash, and as far as I know, it isn’t on TC’s list of flashes that he has.

Still, given that he is always on the hunt, and always adding to the collection, perhaps it would be a duplicate.

This one is doubly cool, as instead of the normal wooden sheath with the graphics applied, it is a metal sheath example. 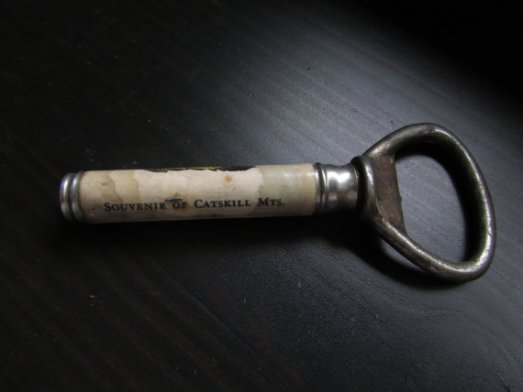 A “Souvenir of Catskill Mts,” this is the second metal flash in my collection.

Unless, of course, Tommy doesn’t have it.

If this is the case, it will surely end up in a trade with him during the upcoming Just for Openers meeting next week!