Several years ago, I picked up an oversized Walker bell corkscrew. And, as I was desirous of still another corkscrew, I made a deal with a fellow collector, and traded it away.

This was early on in my collecting, and I didn’t know how scarce the large belled Walker or Williamson really was. And, while I was happy with what I received in trade, I had a bit of trader’s remorse.

And, over the years, I have only seen one or two others.

One happened to make my best 6 of 2010, and as it was acquired through yet another trade (this time with Tommy).

Knowing that he (slightly) regretted trading it away, even though he got a nice corkscrew in return, I was quite pleased for him when he managed to pick up an oversized Walker–which made his best 6 of last year.

I would love to add another oversize Walker to the collection, so if you have one please feel free to send pictures!

That said, the story goes, that a couple of years ago in Canada, Tommy was shown yet another large bell corkscrew. Covered in paint, with a metal handle, he passed on it. But, after the same collector visited him in Chicago recently; a deal was struck. And, that corkscrew arrived two days ago.

An interesting piece that has a bell very similar to the oversized Williamson. But, with that handle, could it be a shop project gone awry?

One might think yes, but that bell looks right. Perhaps they just added a metal handle…

Now, I will preface this next part by explaining, that until a few hours ago, I didn’t know Tommy had this corkscrew And, he only sent pictures after, I sent him a picture of my latest acquisition. 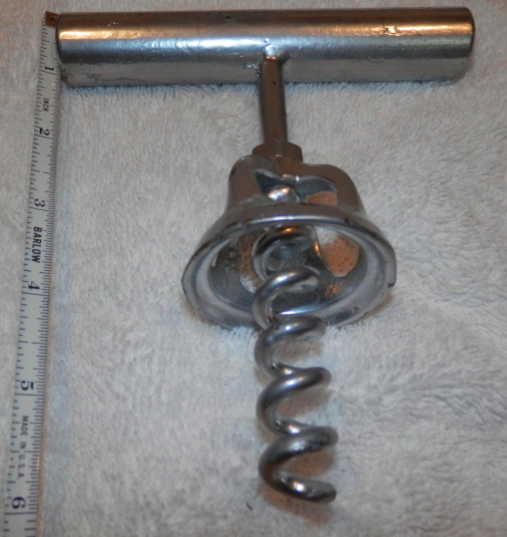 It looks to be the same corkscrew!

Available for a smokin’ Buy it Now of 35 dollars, the seller described the piece as “Silver painted metal corkscrew–really heavy duty. Appears to be someone’s shop project and not a production piece. No markings.”

After comparing it with Tommy’s, the question of shop project? I would say, probably not.

Is it a production piece? Well, now we know they produced at least two of them!

(And, Tommy, it is time to break out the paint remover!) 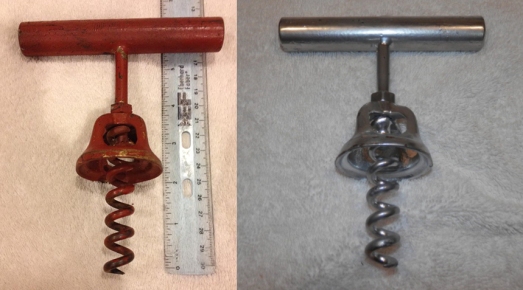 Do any of you have a similar corkscrew? I would love to see pictures!

The Canadian Corkscrew Collectors Club Annual General Meeting will soon be upon us. And, while the registration deadline recently passed, our hosts have decided to extend it.

Now is your chance to register for the upcoming meeting, participate in the buy, sell, and auction, and enjoy the camaraderie of your corkscrew collecting friends.

Not a member of the CCCC yet? You can join the club AND register to come to the meeting.

It will be a fantastic time in the big apple!