As I have mentioned in the past, one of the first really good corkscrews that I purchased on eBay was a Barnes patent bow with hooks. I was living in Chicago at the time, reading some random text on globalization and corporate culture, and happened to check eBay while on a break from reading.

And, the Barnes came up with an opening bid of 24.99. As it was relatively early in my collecting, I didn’t know it was a Barnes. I ran downstairs and grabbed Don’s Ultimate book. But, it wasn’t in there. I ran back upstairs, and looked at the listing again, just to be sure I knew what I was looking at.

I knew it looked somewhat familiar. Then, I ran back downstairs and grabbed O’Leary’s book on American Patents, and began thumbing through. Then, I saw it. Okay, it is a patented corkscrew, and one that looks pretty darn cool.

I ran back upstairs, and went back to the listing. It now had a Buy it Now of 85 dollars.

I hemmed and hawed for about 20 minutes, and after taking a deep breath, clicked the button.

Over the years, I have come to know who it was that requested the buy it now, and to this day, he refers to it as his Barnes, or my Barnes. or the Barnes that you stole.

I didn’t steal it, mind you. I just happened to click the button first.

Since then, I have added other Barnes corkscrews to the collection. The single and double helix direct pulls (1876) patent. And, the single helix bow without the hooks.

You can see these on my barnescorkscrews page

There are other variations out there, and Tommy managed to acquire the version with the little cuff that locks the corkscrew in place. I definitely want to add one of those to the collection, if anyone has one!

On that piece in particular, there are those that have suggested that the Barnes bow without the hooks, that doesn’t have the cuff, is missing the cuff. I would argue otherwise. While the example with the cuff doesn’t turn up often, within Barnes’ patent description and drawings he shows the corkscrew with hooks and without.

Further, the patent drawing shows that there are two helixes—much like the 1876 patent—however in the description he explains that, “This improvement can be used in a double or single screw-coil as desired.”

The cuff, as Tommy’s Best 6 for this year explains is marked PAT. APD FOR. with the Barnes bow having the 1884 patent date across the handle. So the cuff post dates the corkscrew patent. I have yet to “borrow” Tommy’s Barnes to see how easy the little cuff might be removed, but I am guessing it wouldn’t simply fall off.

Anyway, a couple of weeks ago, an auction lot on an non-ebay non-corkscrewcollectors auction turned up with a selection of kitchen tools, and amongst them was a couple of folding corkscrews. At first glance, one might think it was a Havel patent.

Looking closely however, and in comparing it with the example already in the collection, it is indeed a Barnes bow.

Today after much waiting, the auction went live, and while I had placed an absentee bid—and rather healthy one at that—it turned out I would be able to watch the auction live. And, perhaps bid again, if needed. 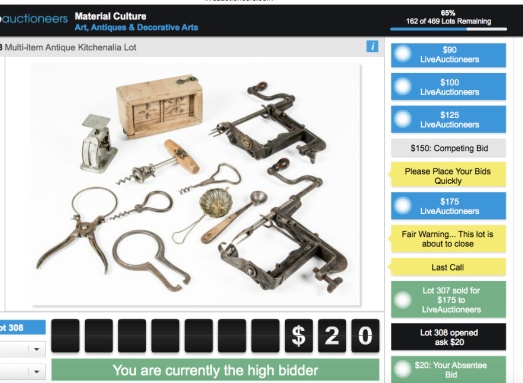 I was in the lead.

Then another bid came in, and it was at 30

I was in the lead.

Am I really going to get this thing for so little?

I was still in the lead.

It ended. And, I was the winning bidder!

Now, what to do with all the other stuff that comes with it?