And, throwing a wrench into the best 6 selection, was a recent purchase of a Carlo Garimaldi patent waiter’s corkscrew. While Don had one on his sale page, this one came from elsewhere–and was quite the deal at that.

Well marked and also an advertisement for Gancia Brut, it arrived yesterday and I was quite pleased with the condition, and in short order put it to good use!

Of course, I also went to the patent to read a bit more about it. The patent description explains:

On of the principal features of the invention lies in the construction whereby the ordinary cork stopper is withdrawn. In connection with this feature, however, it is to be understood that I am aware it has heretofore been proposed a device to rest on the lip of a bottle after the corkscrew has been entered in the cork, whereby a leverage may e formed to enable the cork to be readily started from the bottle-neck. All devices of this character which have come under my notice are capable only of partly withdrawing the cork, and the final withdrawing operation must be performed in the usual way by a direct pull on the stopper, and the trouble in removing the stopper is not entirely overcome. By my invention the stopper may be entirely withdrawn from the neck by the leverage operation.

Okay… so how is this going to work Carlo?

In his patent description, he goes into great detail. I will include the figures from the patent, so you follow along. 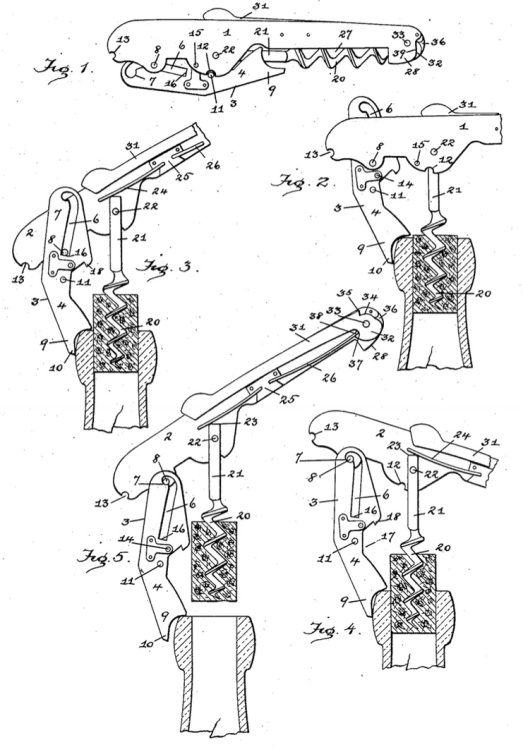 The operation of extracting a cork will now be described. By reference to Fig. 2 it will now be seen that the first operation consists of inserting the corkscrew in the cork stopper and then resting the U-shaped head 9 on the mouth or rim edge of the bottle-neck. When the parts are thus positioned, the stationary pin 8, which passes through the slots of 6 of the fulcrum-lever, has position at the lower end of said slots and rests on the lower fulcrum point 16. While in this position, the operating-lever formed by the outer projecting ends of the side plates will be raised, and as the fulcrum-lever is supported on the rim edge of the bottle-neck and cannot move downwardly the corkscrew and stopper will be compelled to move upwardly and away from the bottle-neck until the parts assume the position seen in Fig. 3. This is the limit to the upward movement of the corkscrew as long as the fulcrum-point 16 is maintained, because any further movement of the operating-lever would cause the corkscrew to be drawn laterally, and consequently result in breaking the bottle-neck. Unless some construction is provided to enable the fulcrum-point to be changed the further operation of withdrawing the cork must be by a direct pull in the usual manner of operating well-known corkscrews. So far as I am aware no one has provided a device to enable the fulcrum-point to be changed at this point in the stopper-extractor operation. In order to completely remove the stopper, the next operation in my device is to elevate the fulcrum-point, as seen in Fig 4.

(You might note that he repeats himself in the final paragraph, but that is how the patent reads)

The operation of the device is extremely simple and effective and enables the stopper to be quickly withdrawn by two successive operations of the operating lever.

Okay, this is supposed to be simple and effective.

In essence the corkscrew worked quite well, and functions like a two-step waiter’s corkscrew. Not coincidentally, in the two-step (double fulcrum) 1999 Puig patent, they reference the Garimaldi design.

A very nice addition, and certainly another candidate for the best 6!!!