Corks are removed without tearing the by means of a cork puller with a flat hook at the end. The extractor is inserted at one side between the bottle and the cork, and a twist places the hook where it will fit under the bottom of the cork. Then a slow, and steady pull will remove the stopper, usually with little difficulty.

From a 1926 issue of Popular Mechanics

In 2008, I blogged about missing out on a Williamson patent spoon with folding corkscrew carrying an advertisement for Wah-Parilla.   Ever since, I have been on the hunt for another one.

Last week, a Wah-Parilla spoon was listed on eBay, and I put it on my watch list.  And, the auction was ending yesterday.

With a snipe bid set, and the spoon sitting at 77 dollars, I hoped for the best.

This morning over coffee, I checked email, and I had indeed won the auction.  A fair amount above the 77 dollars, but quite a bit less that my snipe bid.

An excellent addition to the collection!  But, what is Wah-parilla you ask?

The best spring tonic is Wah-Parilla, a purely vegetable remedy compounded from medicinal roots and barks—mainly Wahoo and Sarsaparilla. It corrects the liver, stomach, bowels, and purifies the blood after nature’s methods—pleasantly and certainly.

is guaranteed to give a positive benefit. A printed guarantee accompanies every bottle, with instructions to the dealer to return the money if the purchaser is not satisfied with the result. Don’t risk taking mercury and potash—get the pure vegetable blood purifier—Wah-Parilla. At druggists.

And, in Practical Druggist and Review of Reviews—as well as other publications from the same time (1900) period, the Churchill Drug company registered the trade mark, “Blood purifier or tonic. Churchill Drug Company, Burlington, Iowa. The compound word, “Wah-Parilla.”

Last night, while the lovely personal personal trainer was putting some finishing touches on a press release,  I happened to check eBay for a moment.  And, what should appear but a Mclean patent with a buy it now or best offer…

Now, the buy it now price was fair, and as you all  know, I am always looking for a deal and could have made an offer.

That said, had I not clicked the Buy it Now button is surely would have been snapped up.

I clicked. I paid.  I did the American-patent-corkscrew-for-cheap-dance-of-joy… 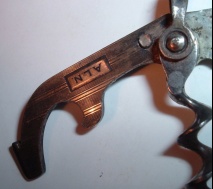 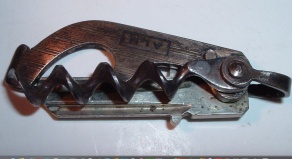 So what is  this “pivotally and foldably” thing you mention?

In McLean’s 1925 patent description he explains:

“This invention relates generally, to improvements in combination tools; and, the present invention has reference more particularly, to a novel and neat construction of ornamental implement, combining an association of pivotally and foldably connected members, in the form of a key, a box-opener, a seal-cap remover, and a corkscrew, all of which can be attached to the end of a watch-chain, and when folded may be readily and conveniently carried in the vest pocket or the like.”

A very cool little corkscrew that will make for a nice addition to the collection.

As you will note from the pictures, the piece is marked STERLING, and carries a monogram of A.L.N.

I am aware that I have been a little quiet as of late, and truth be told my focus has been more on the wine shop than on corkscrews.

Still, in between the shop and putting up the finishing touches on the latest issue of The Bottle Scrue Times, I have managed to pick up a few corkscrews.

This one came via a random email offer.  A pretty nice Syroco Indian: 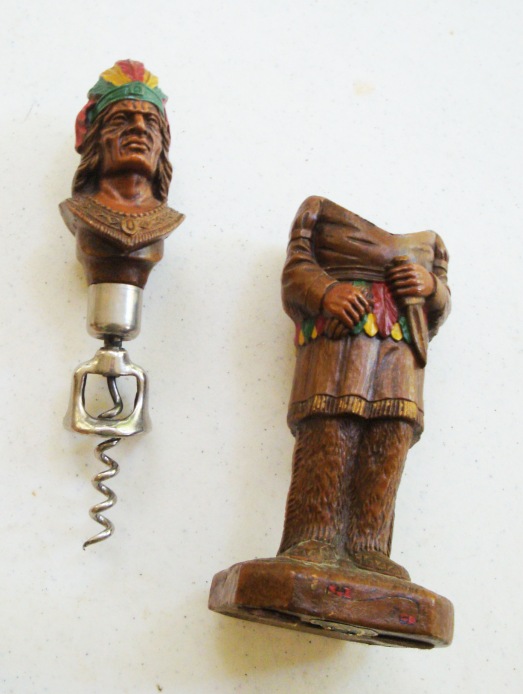 This is a double for me, but the deal was very fair, and…well… how could I resist.

And, I managed to pick up a little celluloid bulldog as well: 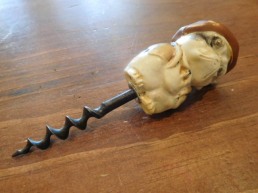 This little guy was on eBay, and had a poor photo.   But, he is actually in pretty good shape.

Also, with the auctions over, Don Bull will begin adding more corkscrews for sale on his website tomorrow at 7:30 est time.  Be sure to grab a cup of coffee, and visit his site at 7:45…

Just so I can get a head start! 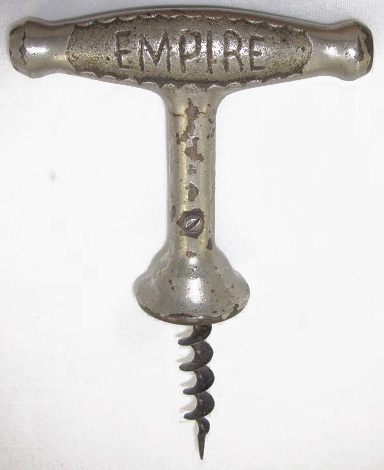 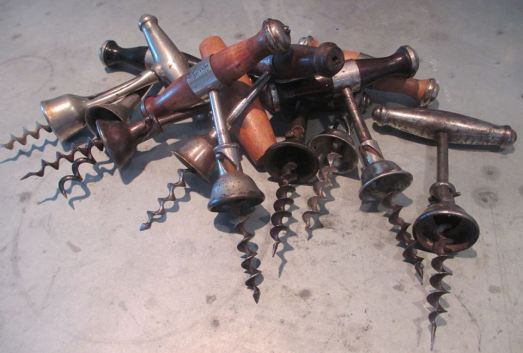 And, in amongst the various new items that are illustrated is a cork puller that has long been on my wish list:

Before you get all excited for me, I haven’t found a Finsel patent (YET!).

But, not for a lack of trying.

If you DO have a Finsel patent, and want to make a trade, I would definitely like to add it to the prong puller collection!