The past few weeks have been fun-filled.

Leon came for a visit just last week, and narrowly made it onto the boat.

With the lovely personal personal trainer on the mainland, and Leon heading north as fast as traffic would allow, she somehow convinced the ferry crew to delay their departure just enough so Leon could round the corner into the ferry terminal, head right for the boat, and they allowed him to get right on.  1 minute past departure time, Leon was safely aboard with the lovely. 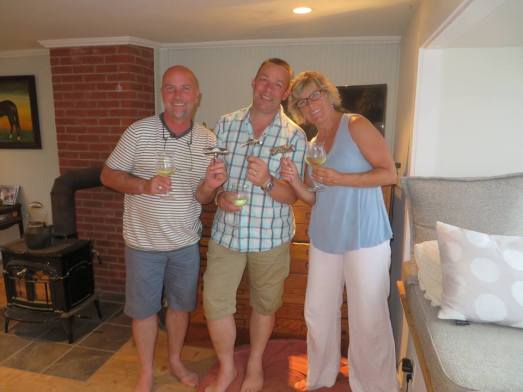 Of course the island this time of year is teeming with people.  Islanders, Summer people, day trippers; the swimming quarries are frequented, the wine shop is busy, and the “season” is in full swing.

In midst of the busyness of it all, I recently “mailed” out the latest issue of the The Bottle Scrue Times with part of its focus being on the upcoming AGM.    And, it is to the Annual General Meeting we will soon be headed.  Tomorrow we hop on the 8:45 boat, and after a few errands we will head down to Boston, where the following morning we will fly out to Vancouver, ultimately arriving in Nanaimo for the ICCA get together.

I have brought a few corkscrews for the show and tell, a few more for the annual auction, and even more for the buy and sell.

It will be fun to reunite with old friends, and perhaps find a corkscrew or two to add to the collection.

I will update the blog as the events transpire.  Stay tuned.

After a bit of back and forth, a price was agreed upon for an unusual multitool with corkscrew.  And, while the back and forth was back and forthing, I messaged Tommy, as I was at the wine shop and didn’t have O’Leary’s book handy.

The piece is marked PAT. PEND., and looked vaguely familiar. 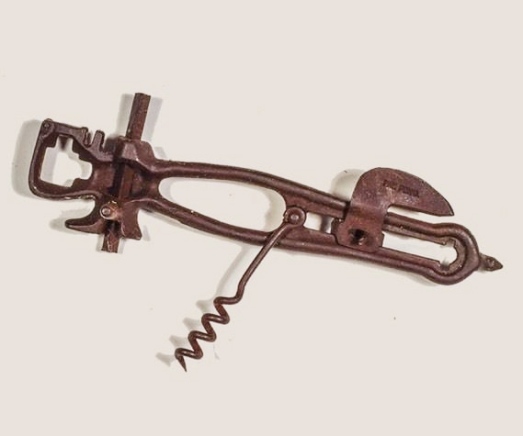 Fortunately, Tommy was available, and had O’Leary handy, and sent back the following photo from the book.

Well, there certainly are a lot of similarities.  But, the 1905 Arthur Merton Parker patent, as pictured in O’Leary, isn’t quite exact.  On the other hand, it is pretty close. 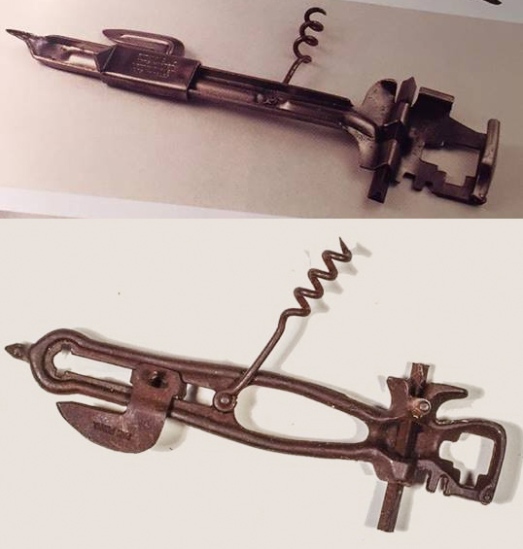 Perhaps with the PAT PEND mark, this simply is an early version of the Arthur Merton Parker patent.

Maybe we should check the patent drawings…

We are getting closer, but not quite there.  But, our man A. M. Parker, had other patents…  Could this have been yet another can opener he created.

Digging a  little deeper, I ran across this drawing from 1907

Given that I was now home, I grabbed O’Leary and skimmed through, checking the Merton Patent first, and then BOO to see if the drawing existed there.

Feel free to weigh in.

I have asked John Morris to bring his example of the 1905 Parker patent to the upcoming corkscrew meetings in Vancouver.  It will be interesting to compare them side by side.

A W. A Zietzke patent combination tool with a corkscrew?

Let’s check the back of O’Leary.

From his patent description: In the accompanying drawings, which illustrate the invention, Figure 1 is a side view of the present device. Fig. 2 is a bottomplan showing the parts in their folded positions. Fig. 3 is a detail view with one of the sides of the handle cut away to show the construction of the corkscrew and its retaining’spring, and Fig. 4 is a detail showing the wrench and screw-driver in its open position.

A pretty cool looking piece.  Do any of you have this?