October 28th!  And, the latest Collectorcorkscrews.com auction is open to list corkscrews.  You never know what will turn up from various collectors collections, and no doubt there will be a few rarities.

As for me, I have picked up some fantastic corkscrews this year, but most of those will be staying in the collection.  That said, there will be a couple placed up for auction.

For those who can’t wait until the auction begins, here are a few that I have put up for auction: 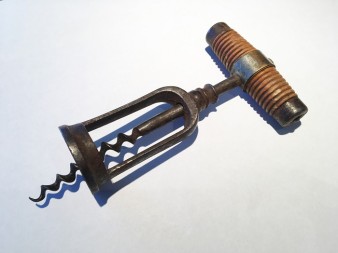 Of course there will be hundreds of corkscrews up for auction.  Be sure to check them out when bidding begins!

About a week ago, I was doing a little somewhat random search on eBay, and an interesting folding bow turned up.  A ten tool bow in pretty nice shape, it clearly had a corkscrew amongst the tools, but the word corkscrew (or cork screw) was nowhere to be found in the listing. 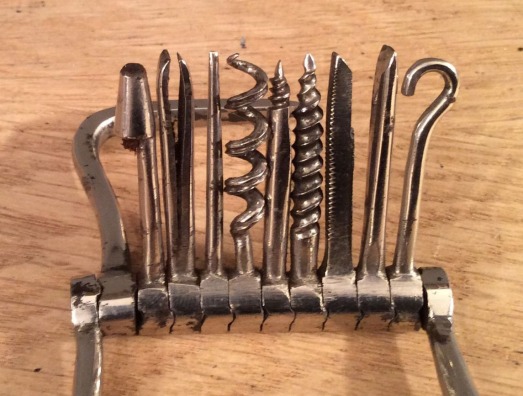 Over the course of the day, there was another bid, and then another.  Still, with about 15 minutes to go, it was hovering at about £10.  I placed a bid of £15, and thought…would this hold up?

Of course it won’t…

As we passed the 5 minutes remaining mark, I was outbid, and the piece sat at £16…

With a few minutes left to go, I went a bit higher…

Apparently, it went largely unnoticed by the usual suspects.

Now this particular bow is also marked, Arnold, 61,A, Piccadilly.

And, with a bit of searching around, I found this advertisement in an issue of The Connoisseur: A magazine for collectors from 1901.

A nice Traveller’s Companion to add to the corkscrew collection!

Do you have a folding bow corkscrew with multiple tools?  I will happily pay 2.55 per tool.  Maybe a little more.

A week or so ago, an interesting chatelaine with corkscrew was put up for sale on a non-ebay site.  The price seemed a little high, and there it sat…

It is quite a handsome thing…and I repeatedly would go back to the website to check to see if it had sold.

The other day, I emailed the seller and suggested that with a price reduction, I would be interested.

Of course, key to my purchasing the piece is the attached tools, one of which being a three tool miniature folding bow corkscrew.

The seller agreed to the reduction, and a deal has been made.

I have updated the Anton Trunk corkscrew page with the new images, and a side by side comparison of the two variations.  But, I figured, I might as well add those photos here as well:

They are actually quite different, beyond the britches…

The hunt will continue for more information on Trunk, and if you have any to share, please drop me a line.

From a 1901 issue of The American Angler 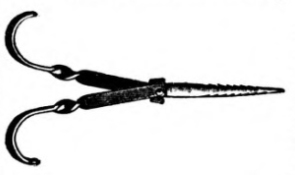 This cut represents the most novel invention of the age—THE KENTUCKY CORK EXTRACTOR. The simplicity of its construction and practicability of its use recommends it to the public. Instead of twisting and screwing, you merely push the points into a cork, and, by the natural position an action of the hand in drawing it out, the points open and their barbed edges engage the cork, and the same is easily drawn. Close the points by separating the handles, and the grip is loosened and the cork relieved. A glance at the cut will satisfy one of its many advantages. Price 30c. EACH, post-paid.
W.H. HATHAWAY, P.O. Box 2156, New York

A couple of years ago, I managed to find evidence that Anton Trunk was involved in the Frary Cutlery Company.  While I had wanted to add an Anton Trunk Patent (1886 #D-16,799) corkscrew to the collection prior to uncovering this piece of information, it made the want a little more like a necessity, and in 2014 I did manage to acquire one, and it made my best 6 for that year.

And, having acquired a Trunk, and having been able to provide a few linkages to Frary, I added a Trunk page to the website.  You can visit that page here.

Of course, if you look at O’Leary, you would note that there are two variations of the Trunk.  One nude, and one that reflects the patent drawing, with her wearing some sort of britches…

As it happens, the other day, I ran into another version of the Trunk.   The photos online were rather dark, and I couldn’t make out if the helix was in good shape, but the price was fair enough, and I snapped it up.

In looking at the photos online, I didn’t realize how different the two versions are.  Obviously, if one was nude, and one wasn’t, there were two different castings.  And, when you put them side by side, you can see how different one is from the other. 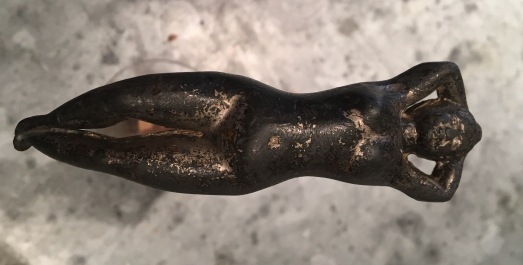 Of course the helixes are different as well:

And, neither are marked with any patent information.

Still, I am quite pleased to have the second (or first) version of the Trunk patent, and I am pretty sure she will make the best 6 of the year.

If any of you have any information on Anton Trunk’s corkscrew, please drop me a line, I would happily add it here, and to the website.

This morning, over coffee (big surprise) I was making the usual rounds.  Auctions, eBay, etc., and ran into a listing that I found most interesting.  It was for a champagne tap with what looks to be the original box, but one that didn’t look familiar.

With all of my corkscrew books (minus O’Leary and Bull’s ultimate) currently in storage whilst I build cabinetry for the “corkscrew room,” I dropped an email to Don asking if within his book on Champagne Collectibles was there a reference for a Greenwich Champagne Tap.

In short order (relatively short order), I received an email from Don:

“Not in Champagne Collectibles and not familiar with the Greenwich Tap…”

I knew I hadn’t seen it before. 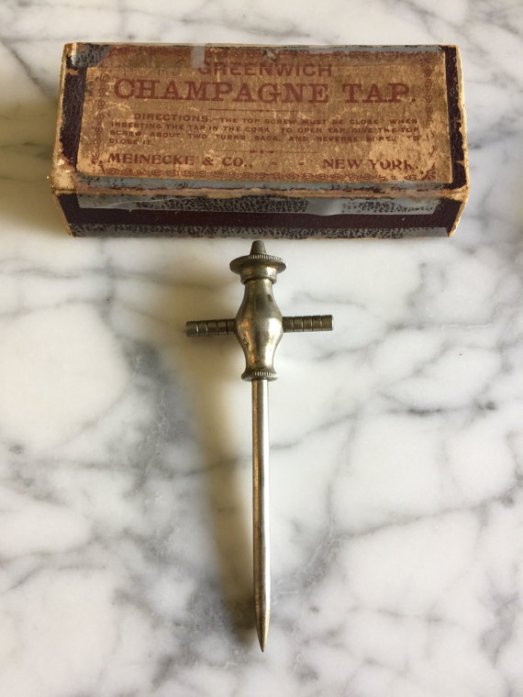 I went back to the listing, bought and paid for the tap, and immediately started searching “Greenwich Champagne Tap” and the company name on the box.

So far, nothing has really come up.

The box has the following writing:

DIRECTIONS –The top screw must be closed when inserting the tap in the cork. Top open give the top screw about two turns back, and reverse. Be sure to close it.

Once it arrives, we will see if there any other clues about the piece…

After a few days of waiting, the Joseph A. Smith patent arrived.  And, it is better than I had hoped.  The photos from eBay, made it look at if the worm might be short.  But, then again, the photos were pretty poor and with an asking price of 18 dollars, it was worth taking a chance.

The worm is complete, and I am quite pleased with it. 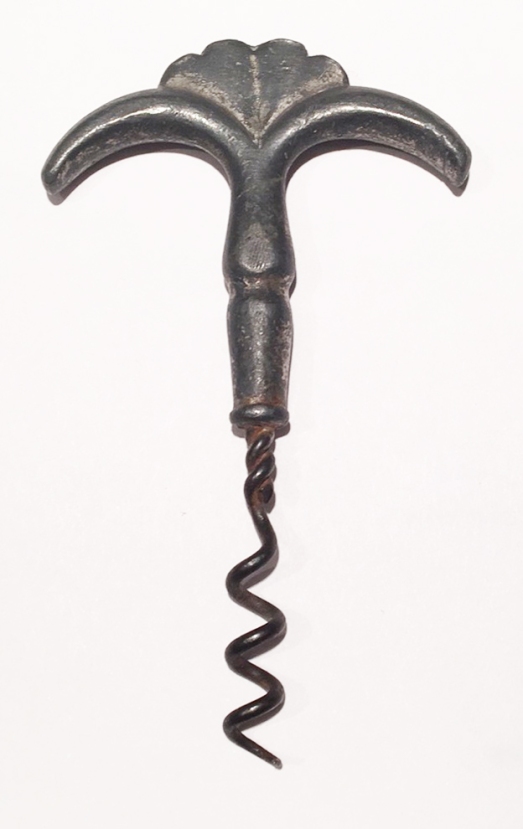 Best 6?  It should make the list, but maybe there is something else waiting in the wings.

It has been 20 years since Fred O’Leary published his tome on American corkscrews, and while I have pretty much every book ever written on corkscrews, it is Fred’s to which I most often turn.

Now, I haven’t committed every corkscrew in his book, or every patent drawing pictured in the back of O’Leary, to memory.  But…almost.

As it happened, yesterday, I was perusing ebay, and a somewhat familiar corkscrew was available for a pretty low buy it now.  Under 20 bucks; I saw the images and thought… is that a ?????

As my copy of O’Leary was sitting nearby, I went over and thumbed through the pages.

What year was that again?

And, then I thought for a moment, perhaps I should simply buy it and look after the fact.  It did have a buy it now, after all.

Now there is a story about this corkscrew.  Years ago, I had an interesting folding corkscrew with advertising that had gone missing.  And, in conversation with John Morris, I was sharing the tale, when he remarked that he had an American patented corkscrew that too had gone missing.  As we both had found another example of our wayward treasures, we agreed that if ever the two showed up, we would trade the two.

That was many years ago, and the folding corkscrew has yet to show up, and I am guessing John’s missing American piece is still missing.

(okay, get to the point Josef) 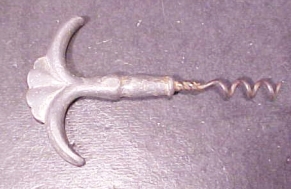 Definitely a best 6 candidate, and I will share better images upon its arrival.