Not that I am obsessed or anything, but as I have been doing a little digging, I have run across a few more poison indicators, and poison indicator patents.  As mentioned, previously the little bell is the Mahalah T. Hudson patent of 1915.

Now, there is also the Bailey’s patent of 1890.  And, the corkscrew that turns up in advertisements from the time is a departure from the patent drawing.

It could well be, that his patent design was too costly to produce.  And, I have yet to see a Bailey’s Safety Alarm with the little bell attached.  The closest piece that has been discovered is a little spiked disk with a Clough corkscrew attached. 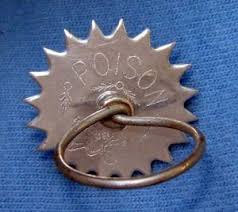 That said, there are a couple of other patented poison indicators that have a similar design.

Before, I share a recently discovered patent, I will add here that researching “poison indicator” does garner a few results that have proven helpful.  Searching “Poison Disk,” results in fewer results.  Mistyping “poison disc” however will result with many references to Bell Biv Davoe or the 90’s hair band, Poison.

As I am prone to do.

So, as I am trying to wade through the Bell Biv Davoe or hair band results, I ran into this patent: 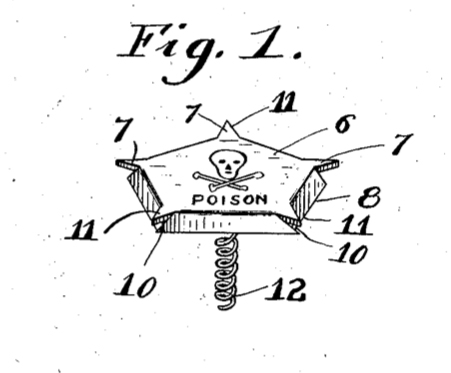 And, a description of said patent in a 1915 issue of Pharmaceutical Era

This invention is brought forward as a new article of manufacture (Patent No. 1,121, 459) by Arthur E. Blake, It comprises single blank sheet of metal material having plurality of sides and slit at each corner to present substantially v-points at the corners intermediate bendable portions between the corners, bent downwardly and at right angles thereto lie at the sides of the stopper and terminating in relatively sharp points lying below the plane of the v-point corners of the blank, and a stopper attaching portion carried by said blank.  The stopper attaching portion is inserted or withdrawn from the cork by gripping the sides and straight longitudinal edges of the downwardly bent portions and rotating the blank.

In essence, the bent portions would also you to screw the piece in, and the spikes would prove as a deterrent should you mistakenly grab it for a quick drink.

In reading the Blake patent description, it does mention corkscrew, explaining that, “The member is provided in its central portion with a spiral-like portion or corkscrew 12, the latter being adapted to be engaged in the cork stopper 5, whereby to hold the latter and the indicating attachment operatively connected together…”

Do any of you have the 1914 Blake patent Bottle Attachment?

Interestingly, the patent description also mentioned that the top of the disk would have a a Skull and the word Poison upon it.  Did the construction of the Blake prove too costly, and perhaps the Skull Crossbones Poison corkscrew is a modified version of it.  One would have to include the corkscrew handle, as the little spiky edges would do a bit of damage to your fingers if you tried to screw it in otherwise.

I have no doubt that these recent discoveries will lead to an article about poison and poison indicator corkscrews.  If you have any information regarding these, or happen to have the Blake patent of 1914, please let me know.