So, yesterday was my birthday.  And, the lovely personal personal trainer and whisked me off island for a bit of a birthday adventure.  Lunch at Slipway, Dinner at Primo, a new kayak, antiquing adventures, a stay and the Camden Harbor Inn with dinner at Natalie’s; it was a fabulous time.

Along the way, we found a few corkscrews.  Pretty much all of which remain in their respective locations.   One of which, is now on the island.

This particular corkscrew actually came from the shop owned by some friends.  Over the past year, we have come to know a couple that is moving to Vinalhaven.  They bought a building on main street, are currently renovating it, and will be opening a business in the downstairs.

Years ago, we actually met, in the business they previously owned; a wine and cheese shop (oddly enough) that we would pass on our way up to Rockland to catch the boat to Vinalhaven.

And, within said shop was a collection of corkscrews.

During that time, with my corkscrew budget being small, and the corkscrew prices being larger than the small corkscrew budget, I would ooh and ahh, and grab a bottle of wine (or two) and hop back in the car and head north towards our destination.

At some point, the wine and cheese shop changed hands, and the corkscrews were no longer there.  The shop still has lots of antiques as decor, but the collection had gone elsewhere.  Where it had gone, apparently, was across the street to another business that the couple owned.

So, the other day, when we were in the vicinity of their current shop, we popped in to say hello.  They weren’t there, but there was a small display of corkscrews.  Mostly French mechanicals, but I got a glimpse of an turned ivory handle, and asked to see it.

If it was CASTSTEEL, the price was fair.

If it was MURPHY, it was very very fair.

If it was a San Francisco maker (PRICE, WILL & FINCK) it was very very very fair.

I got a better look at the marking, and it turned out to be H & B MF’G.  Now this too is a good thing.  I have owned several turned ivory and bone handled corkscrews, but when they turn up, they are more often marked CASTSTEEL rather than H & B.

That said, I left the H & B behind, and we headed off on another adventure.

Yesterday, I needed to pick up Philos the Wonderdog from where he was being boarded, which happens to be about 10 minutes from the location of the H & B…which conveniently is across the street from a place where they have pretty decent coffee.

Clearly, I needed another cup.

So, after picking up the dog, I headed down for a cup of coffee, and checked in to see the H & B again.  And, the owners were there.  We exchanged pleasantries, talked corkscrews, and I made an offer on the ivory handled T.

While I was paying for the piece, soon there were several other corkscrews presented; a double folding 18th century piece, a mechanical corkscrew cane.  Neither of those were for sale, but nice to see such good corkscrews.

After saying goodbyes, and knowing we will see each other soon, I thanked them for the deal.

See you soon on the island! 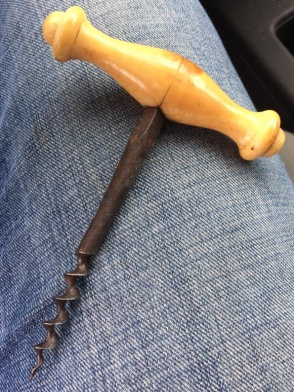 Didn’t you mention a Neal?

Yes, as a matter of fact, in the title of the blog I did.   Over the last couple of days, there was an interesting lot listed on eBay with a buy it now or best offer.  And, the lot contained four kitchen implements, amongst them  Marshall S. Neal 1940 patent opener with corkscrew.

The buy it now price for the lot?  10 dollars.  Still, it did have a best offer option.

Should I try and get it for less?

I opted to not make an offer, and popped for the 10.