So, the other day, I was perusing the usual potential corkscrew sites, when I noticed a large Clough being offered on the CorkscrewCollectors Buy Now site for a pretty fair price.

I have always wanted one of these salesman sample display pieces, and I promptly went through the the process of buying said item.

Measuring approximately 10 inches from stern to stem, it will be a handsome addition to the collection.

In May, I had mentioned how the Barnes corkscrew logo we use for the wine shop, suddenly appeared on our back wall; the sunlight having been just right to project the image on the front window, all the way to the back of the shop.

We knew that we wanted to put something on the back wall, but it was pretty obvious that a corkscrew needed to go there.

So, over the course of a few weeks, I selected a patent drawing.  Then, after a little work with Illustrator, came up with what would reflect the patent selected, while still changing it to have the same Island Spirits vibe.

After then vectorizing the image, we sent it off to a company who take the digitized image and enlarge and produce it in vinyl.

We picked it up a week or so ago, and given it was two pieces that we would have to install ourselves, we walked through the process a couple of times, ensuring it was the right size, dimensions, etc.

The other morning, after a couple cups of coffee we headed to the shop, and began the process of installing a 5 foot tall corkscrew on the back wall.

As it happened, it turned out pretty well.  And, thus far, it has been met with lots of oohs, ahhs, and corkscrew appreciation.

A nice addition to the shop!

It sort of matches up with a patent drawing.

It had a buy it now. 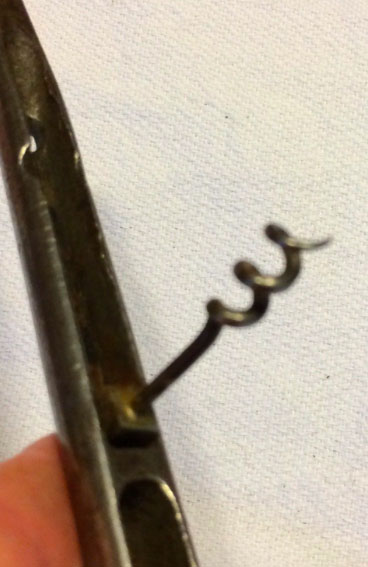 In the eBay listing, there was no indication of markings, so I am guessing that there aren’t any.  Do any of you have any info on this interesting corkscrew – combination tool?

It has been a pretty busy last few weeks.  While the lovely and I got to steal away for a couple of days to go to Brimfield, the wine shop is buzzing with activity, as the Summer visitors have come to the island.  Many of these folk have over the years become good friends, and with the island’s population swelling four-fold, there is much wining, dining, and convivializing going on.

And, it is around this time every year, that we plan our escape.

We love the island and the activity/energy of July and August, but the Annual General Meetings of the ICCA and the CCCC will soon be upon us, and we will soon hop on the boat to the mainland, and after making our way to the airport, we will be off to Mainz and later Zaandam.

The wine shop will be left in very capable hands, and we will be off on our next corkscrew adventure, where we will engage in a couple of weeks of wining, dining, and convivializing, and corkscrewing around.

More corkscrew news as it happens.

It has been a few years since we have attended a July Brimfield.  When we lived in Massachusetts, I would still make the drive down, as it was all of about 45-50 minutes away.  Since moving to Maine, however, with the boat ride, drive, hotel, etc., we have been less inclined.

Still, there are a fair amount of dealers that turn up, and whilst smaller there are a group of dedicated buyer/collectors who make the trip.

And, so, with the wine shop being taken care of by a stellar crew, the lovely and I stole away for the opening day of Brimfield.

And, the aforementioned cycle of less dealers leading to less buyers leading to less dealers, was pretty apparent.  One particular field that might take you an hour or so, if you were hustling, was completed in half that time.  And, I was meandering, as it appeared as though there were no other corkscrew collectors present.

Still, there are dealers walking the fields that know a good corkscrew when they see one, and so one does have a fairly decent pace.

Oh, did I mention that rained for the first 5 hours of the show?

When I got there, it was pouring.   I hopped in a taxi from where we were staying, with the lovely planning to arrive a bit later than 5 am.  I had borrowed an umbrella from the hotel, and began my trek across the fields.  Word from various dealers was that it was supposed to let up around 10.  It did, now and then; until the next could burst and deluge.

Of course, with the lower dealer count, lower buyer count, heavy rains, many dealers chose to keep their tents closed, and presumably stay in bed, until the rain abated.

Still, there were a corkscrews to be found, although with fewer dealers, inevitably there would be fewer corkscrews.

A Clough here, a few wire cork retrievers there, I had picked up a few items by the time the lovely was supposed to arrive.  And, then literally as she was pulling into the parking lot, and I was in the adjacent field, I ran across a Syroco Indian (just the head version) for the nice rainy price of 15 dollars. 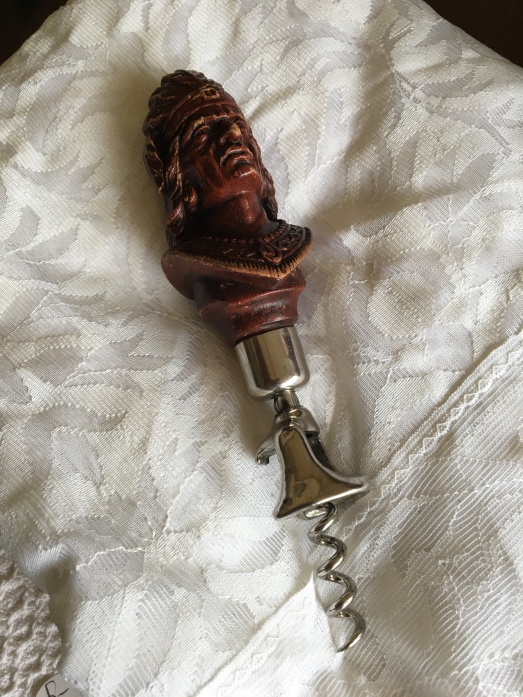 With the Indian now in my backpack, and the lovely bride walking the fields with me, things were looking up.

After lunch, we headed to Dealer’s Choice (which opened at 11:00).  By now the rain was over, but with the sun coming out, and temperatures heading towards the 80’s, it began to be muggy, humid, and you could hear people (that were complaining about the rain an hour ago) getting a little vocal about their new discomfort.

But, the sun was out, we are in the fields antiquing, and we were finding… well… stuff: 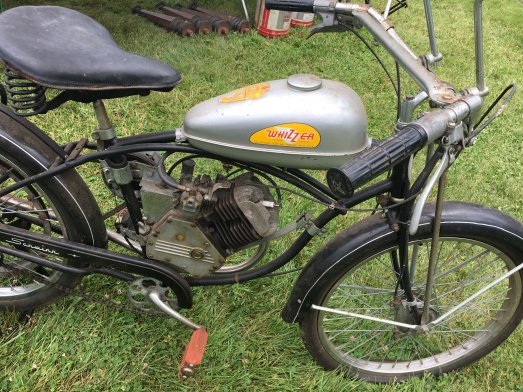 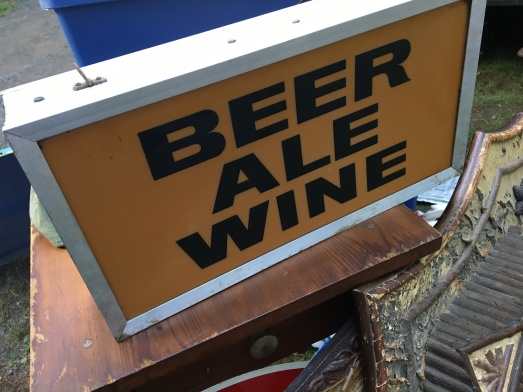 Beyond corkscrews, we were also on the hunt for a few other items.  So, with the lovely heading one direction in a field, and I heading the other, our respective phones were buzzing back and forth with images of midcentury coffee tables and barrister cases; both of which are potential additions to the corkscrew room.

There were a couple of contenders, but nothing was exactly right.  The hunt continued.

Did I mention there was stuff to be had? 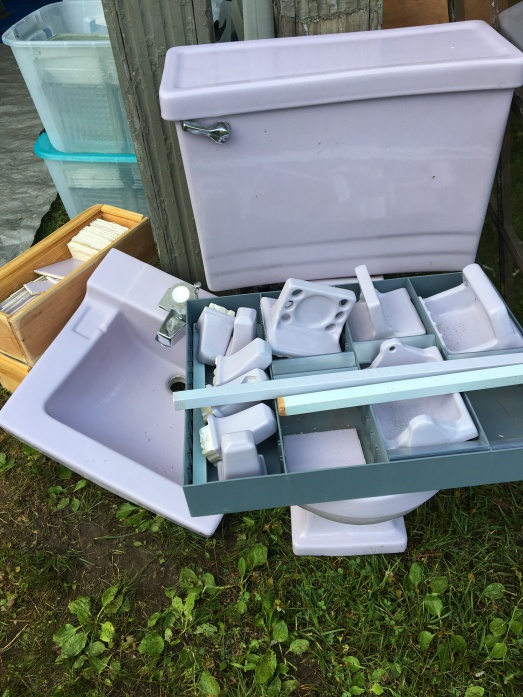 Following the 11:00 field, we reconvened and headed over to the last field of the day.

And, as it goes in July, the dealers were sparse, but hope springs eternal.

I passed on a deal for two pair of ladies legs.  One pair was the half flesh half stocking variety, the other more interesting as the stripes were red and black.  The asking price for the two pair was steep.  I offered big for just the red and black, but the dealer was only going to sell them as a set.

I have a feeling they will be available in September, and will try him again.

Having exhausted the fields for the day, and having (according to my iPhone) traipsed some 14 miles, we called it a day.

Half a dozen corkscrews, no midcentury coffee tables, no barrister bookcases…

The next morning, the lovely hit the gym, and I headed back to the show.  We were actually going to be heading home that morning, but I stole away for the morning opening.

At 6:00, I made it through the appropriate gate, and preceded to peruse the various dealers’ booths.   Again, less populated than the May and September, but attendees and dealers were in better spirits, as there was no rain, and temps were lower.

Alas, no corkscrews were to be found.

Knowing that we had a long drive back home, I decided I would skip the next field (opening at 9:00) and head back to the hotel to pick up the lovely, and begin the trek back to Maine.

Walking through a field on the way back to the all-terrain-corkscrew-pursuit-vehicle, I wandered past a tent where a dealer was unpacking, I asked about corkscrews, and he said did indeed have one.

Reaching from under a couple of boxes resting atop a Mies Van der Rohe Barcelona chair, he pulled out the corkscrew and handed me an 1892 Becker decorative split frame.

A little cash (very little) changed hands, and I was again on my way.

And, with that last purchase, a fun, albeit wet and muggy, Brimfield adventure came to a close on a pretty high note.

Shortly thereafter, the lovely and I were back on the road and heading home, with much of our conversation revolving around our next corkscrew adventures…

Planning for the September 2017 show has begun, and even plans for 2018 are being set forth.

You never know what will turn up.

For the last week or so, I have been keeping an eye on an non-eBay auction, and the lot I was watching ended the other day.

The lot of interest contained several corkscrews, and one was a celluloid alligator.

As I am inherently cheap, I threw out a fairly low bid, and went about business as usual.

To my amazement, the following morning as I was checking my email, it was confirmed that I won the auction.

So, it looks like the celluloid alligator (and all the other stuff) will soon be heading to the island.

The cigar tools are not my thing, so if anyone wants to make a trade, feel free to drop me a line.

As many of you already know, over the years I have been culling the herd, as it were, and reducing the corkscrew collection from anything-corkscrew to American patented and manufactured corkscrews.  Not that I don’t appreciate English, French, and German corkscrews, it just seemed to make sense to me.  Limited space, limited funds, and American stuff does turn up whilst traipsing around looking for corkscrews.

Still, there are some German, British, and French corkscrews that remain in the collection.  Some are a good fit for where we live.  Celluloid Mermaids do somehow fit given we live on an island 14 miles off the mainland, for example.

And, as of yesterday, another German corkscrew is headed to the collection.  This isn’t the rarest of German corkscrews, as it is a simple Steinfeld waiter.   And, I have had others, but this one also seems to fit as it carries an advertisement for an early California winery; Mont Rouge.

Mont Rouge was a winery in Livermore California started by Adrien Chauché in the 1884.

An article from an 1886 issue of the Livermore Herald explains:

The Mont-Rouge Vineyard was planted by well-known wine expert MR. A. G. Chauché, in 1884.  Its name is taken from the celebrated Mont Rouge in France, resembling the same in general style and principally in soils. Mont Rouge (Livermore) contains as fine an assortment of wines as there is in the state.

The location of the vineyard is on a slightly elevation within a mile of the town of Livermore.

The winery is constructed for the best conveniences for the proper wine making and ageing of wines, a fact most important in the making good wines, as the handling of properly fermented wines is the sure road to a good article.

Mr. Chauche’s one ambition in entering into the California wine business was to make such goods as would in the course of time sell on their name as well as merit, the same as well-known European wines are sold to-day…

For Chauché, his grape of choice was Zinfandel, and in 1889, his Mont-Rouge Zin won gold at the 1889 Paris exposition.  Clearly he lived up to the ambition mentioned in the 1886 article. 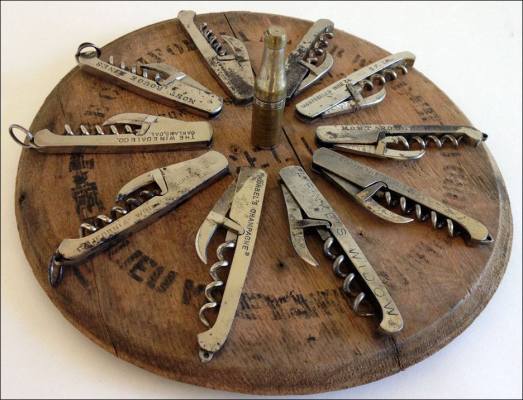 Do you have a Steinfeld waiter with California wine advertising?  Are there others that we could add to Dean’s list?