One of the cork pullers that I have long been after is the 1909 Charles C. Call patent.

An interesting tool, one would push the spike through the cork.  After penetrating the cork, a button is depressed at which point a lever slides out underneath the cork perpendicular to the shaft of the cork puller. This would then allow for the cork to be withdrawn

At least that is how it looks like it work.

In reading the Charles C. Call patent description, he explained it like this.

The device, preparatory to using it for pulling a cork, has the rod C forced to or near the limit of its downward movement, as shown in Fig. 1, longitudinally alining the pivot bar with the stem. The stem with the bar thus ensconced therein may, because of the pointed extremity a, be readily forced centrally through the cork sufficiently far to bring the pivot g a little ways below the lower end of the cork. Now by upwardly forcing the rod, which will automatically be done by the contacting of the angular exteriorly extending member 2′ against the top of the cork so as to bring the lower deflected end of the rod in the least degree above the axis of the pivot, the spring reaction of the deflected extremity in an inward direction exerts a leverage action on the pivot barresulting in the throwing of the same towards a position at right angles to its normal position. This bar then on the upward drawing of the stem through means of the cross handle 03 becomes interlocked the extraction of the cork from. the bottle neck.

It will be noticed that in the position ofthe bar, Fig. 2, a shoulder h is near the point of the deflected spring extremity of the rod. The shouldered formation and the coaction therewith of the stem having its lower extremity of the character mentioned, faciliates in restoring the pivot bar to its ensconced condition, an occasiontherefor may arise. It will be explained in this connection that a person might improperly force the pointed stem through a cork so far to one side that when the pivot bar were thrown to its transverse relation to the stem it might interlock under the. shouldered neck of the bottle, rendering it impossible to pull out the cork or withdraw the implement; but it will be apparent that in such an event the stem may be forced slightly further inwardly so as to carry the bar clear from the cork and then by the manipulation of the red the cross bar would be restored to its alined normal position of alinement with the slot 6, enabling one hand to easily withdraw the device from its engagement through the cork.

By the provision of a cork pulling device substantially such as described, and made of a comparatively small size, quite large and firmly set corks may be pulled with certainty, and after a cork may have been pierced by the bottle stem, and pulled from the bottle and the stem drawn out centrally from the pierced cork, the latter by reason of the elastic character thereof will fill or close the comparatively small axial hole made, thereby leaving the cork more available for continued use than would be the case were the same subjected to the action of a spiral cork screw.

Aha!  An added benefit.  The cork could be reused!

Our man Charles C. Call was awarded several different patents, and importantly, several were assigned to Smith & Wesson, where old Charlie was an employee.  According to Smith & Wesson folk, he worked there for 65 years!

I have been in contact with a Smith and Wesson historian, as well as the S & W historical society to see if we can’t unearth a little more information about Charles C. Call.

More information will be added as it finds its way into my email box.

Until then… this surely is a Best Six Candidate for 2017. 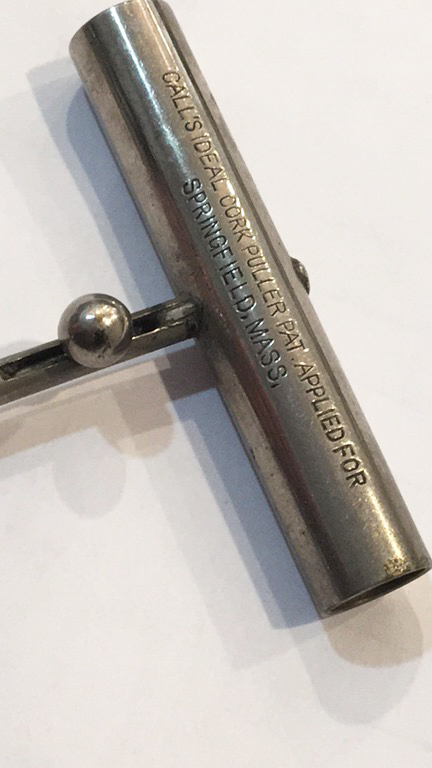 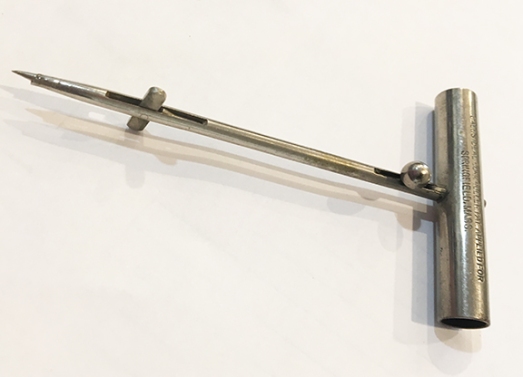