Yesterday afternoon, for a moment, I decided to hop on to eBay, and how fortuitous it was that I did.

A pair of ladies legs had been put up for sale with a pretty fair opening bid.

Still, it was a normal pair at first glance, so I simply put it on my watch list.

And, then I went back to the listing to check for cracks, missing celluloid, size, markings etc.

It looks to have one crack at the knee.

The second photo that came up revealed that this was not your average ladies legs corkscrew.

On one side, it was normal black and white/cream stripes, on the reverse were advertising plates like the Old Elk Whiskey – Always Pure pair of legs that I picked up last year: 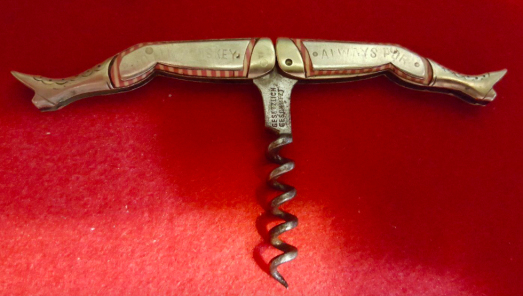 On the plates on this particular pair, the advertising was not for Old Elk Whiskey, instead across the two plates it reads: “MANUFACTURE OF BALLET-CORKSCREWS”

How cool is that?

Did I mention it also had a fair Buy it Now price?

And, the MANUFACTURE OF BALLET-CORKSCREWS legs are on their way to Vinalhaven.

A really cool piece, that could make the best 6 of the year. 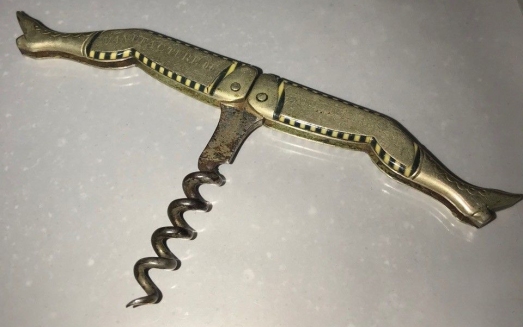 Better photos after they arrive!

The advertising Brangs patent corkscrew arrived today, and it is pretty fabulous.

This one, might just stay in the collection.  Not American, but advertises a St. Louis wine and liquor (and beer) distributor, so it kind of fits…

As of yesterday, invitations and registration forms were sent out for the 2018 Annual General Meetings of both the ICCA and the CCCC.

Sue and I are super excited about hosting the meetings in Maine, and we look forward to seeing you there. 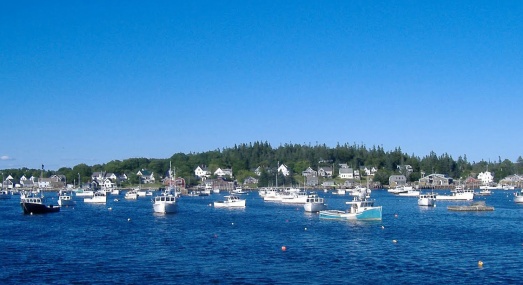 You should have received the forms via email (ICCA), or in the Quarterly Worme (CCCC), but the forms and additional information, are also available on corkscrewsummer2018.weebly.com . 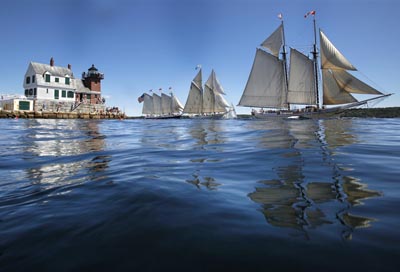 We will continue to update the website with relevant information as we get closer to the meeting dates.

And, we hope to see you at our place for corkscrews, food, wine, and corkscrews!!!

A couple of weeks ago, I found a non-ebay online auction lot, that I found pretty interesting.  And, over the following days, I would go back and see how the bidding was going.

After registering for the auction, I placed a bid, and went back to business at hand.

At the end of the first week, I was the high bidder, and actually the only bidder.  As we got closer to the auction close, a few more bids were placed, but I was still in the lead.

My initial bid was not particularly high, but obviously higher than others that had also seen the auction.

With about 8 hours until the auction close, and knowing that there were 8 other bids, I went back to the auction lot, and upped my bid quite a bit, hoping to ensure that the lot would indeed be heading to Vinalhaven.

Last night the auction ended, and this morning I got the confirmation email.  I had indeed won.  And, the additional higher bid wasn’t necessary, the lot ended at a whopping $27.50 and with a 10% auctioneer’s fee, just over 30 bucks.

And, the metal corkscrew?

And, who is Steinwender and Sellner?

That would be Gustav A. Steinwender and Christian Albert Sellner; wine, beer, and liquor importers and dealers in St. Louis

Steinwender and Sellner, was established in 1863, and the ads above date to 1891 and appeared in the St. Louis Dispatch.

Of course, the Brangs is the Jules Brangs’ French Patent Number 122,704 of April 23, 1878, which is a hard to find piece.  But, with the additional advertising, it is pretty darn cool. 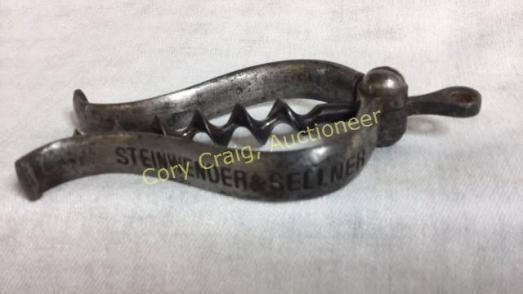 I will add pictures, sans the Cory Craig, Auctioneer watermark, when it arrives in a few days.

A really neat little corkscrew that I have tried to acquire several times to no avail.

Best 6?  It certainly will be in contention!

The 8 dollar buy it now lot arrived yesterday, and I was quite pleased that the Napier Hollweg had a nice sharp helix.  The images from the auction didn’t show the tip, and at such a smokin’ deal, I didn’t take the time to inquire about the condition of the piece. 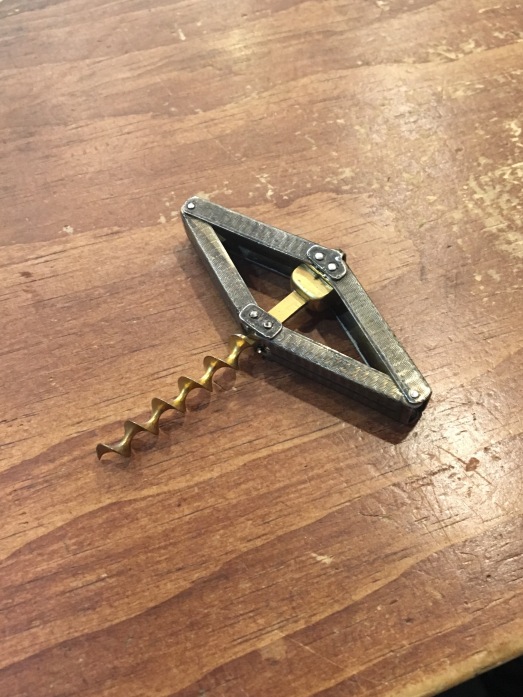 Marked PAT APPLIED FOR on the end hanging ring, and NAPIER STERLING on one of the hinges, it is pretty darn cool.

And, with a little silver polish, is suddenly got pretty shiny! 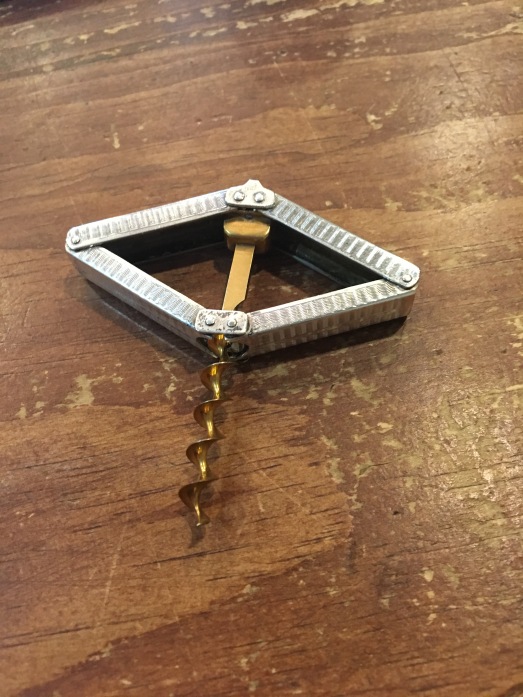 A handsome corkscrew, that is a nice addition to the collection.

Yesterday, I was working on final numbers for the upcoming ICCA and CCCC meetings, in anticipation of sending out invitations and registration forms in the coming week.

And, having crunched the numbers, and having many  many conversations with the lovely to ensure that neither of us has missed anything, I decided to take a quick break from contacts, emails, notes, and spreadsheets, and hopped on to eBay for a moment.

And, the timing couldn’t have been better.  I clicked my normal search, and what should come up but a lot of three corkscrews, with a Buy it Now or Best Offer option. 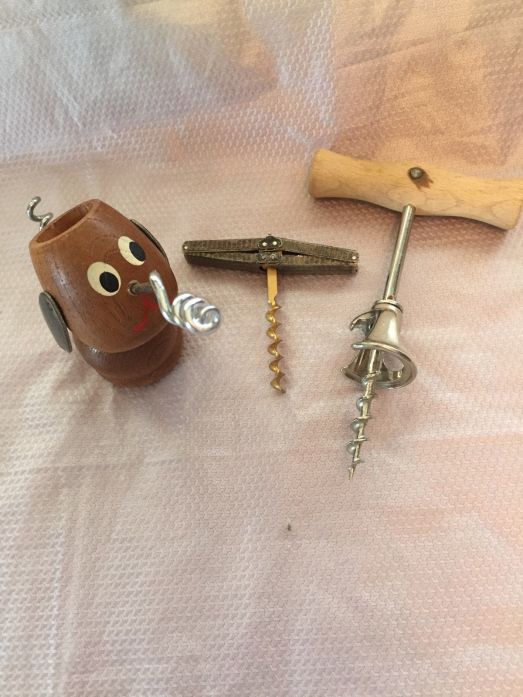 At first glance, I thought;

“Is that a Napier Sterling Hollweg in the picture?”

“I am pretty sure that is a Napier Sterling Hollweg in the picture.”

I was about to zoom in on the picture to get a better look, and then thought to myself,

“Why am I not simply clicking the buy it now button, it is only 8 dollars!”

Knowing that anyone else that saw this lot, would be jumping on it quickly, I did just that.

After completing payment, then I went back to the pictures. 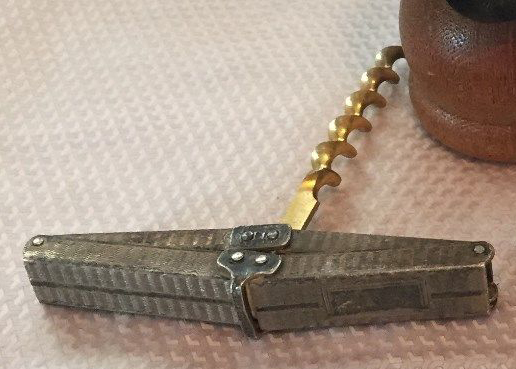 Better pictures when it arrives, but that was quite the deal!

From the July 27, 1895 issue of Pharmaceutical Journal Supplement:

Mr. Fred Coates, chemist and druggist, New Barford, Nottingham, has registered a useful and portable little Cork Extractor, which instantly and perfectly removes corks from bottles and bungs from jars.

Chemists will appreciate it when they have to extra a cork cut off close to the bottle, dispensers will find it indispensable, and it is certainly about the handiest little tool for these purposes one can possibly possess.   The extractors are stocked by all druggists’ sundriesmen, and are retailed at 9d.  and 6d. each, according as they are plated or not.

Do any of you have a Coate’s Cork Extractor?