So, as it happened, this morning I was perusing eBay, and ran across an antique bar screw, listed in category other than collectibles / corkscrews.

It looked vaguely familiar, yet not.

The seller also explained in his description, that it was unmarked, yet in the photos, you could make out the word PATENTED on the base.

And, there was also a buy it now price on the listing.

I went for it. 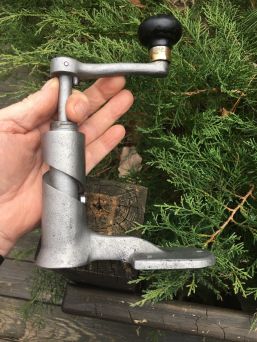 Before I could check out Wayne’s book on bar screws, I had to be at the wine shop.  So, I sent a picture to RL and TC, and RL came back with a picture of the Simplex Bar Screw in Wayne’s book.

I thought it looked similar as well, having owned the Simplex in the past.

Still, without a counter mounted version of the Simplex in Wayne’s book, I did wonder.

A bit later, I emailed images to Wayne, who responded with, “Looks like a top mount version of the Simplex to me, without the fancy casting.”

Okay, thus far we are thinking along the same lines.    Simplex, but not one that was documented in his book.  Could it really be a Simplex, or…?

So, I did a little digging, as I am want to do.   And, what should appear, but in an 1894 issue of The Iron Age, the top / counter mount version of the Simplex illustrated with description

The illustration herewith shown represents a cork puller introduced by Manning, Bowman, & Co., Meriden, Conn., and 57 Beekman street, New York. The construction of the cork puller, which is nickel plated, is shown in the cut, the parts on which the strain comes are roller bearing to reduce the friction to a minimum.

The cork puller is simple, having no cogs or levers; and it is impossible, it is stated, to get it out of order. It is claimed that bottles cannot be broken when using the puller, as the cork revolves while it is being drawn. The wire is cut, the cork drawn and thrown off the worm automatically simply by turning the crank. The manufacturers claim that the puller requires little room in which to operate it, as the it is smaller than other machines; that it takes one-third the power to oepratte it, and that it is positively noiseless in operation.

It was a fantastic year of corkscrewing around!

From adventures to Syracuse, the Murphy Knife Co., Brimfield and beyond, to hosting the ICCA and CCCC meetings in Maine, from the publication of the Syracuse Corkscrews book to christening the “Corkscrew Room” with so many fellow collectors, it has been a fabulous year of antiquing, good friends, corkscrews, and a little bit of wine.

Okay, more than a little wine…

What will 2019 bring?  Lofoten, Stratford Upon Avon, trips to Brimfield…  The mind races.

But, be sure to stay tuned, you never know what will turn up next! 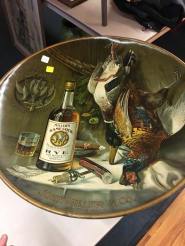 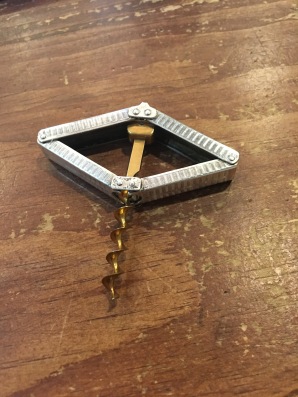 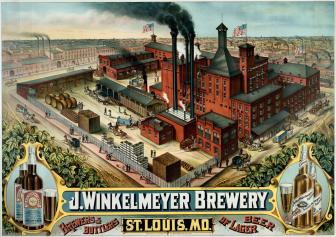 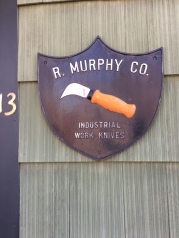 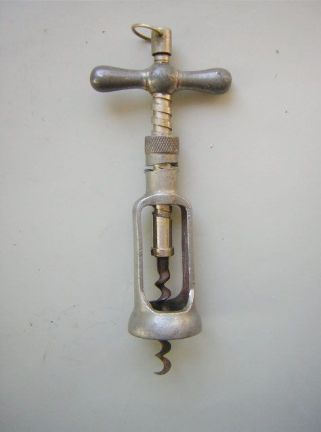 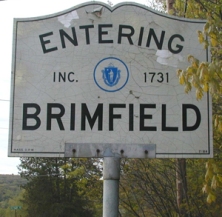 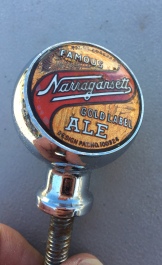 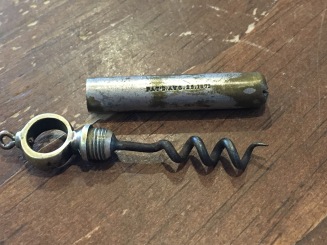 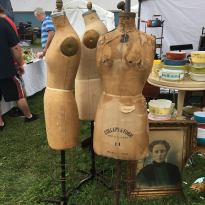 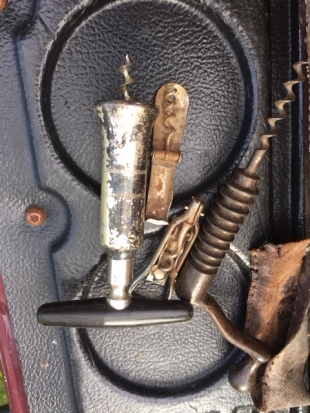 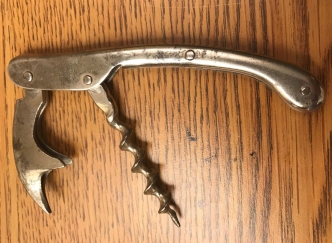 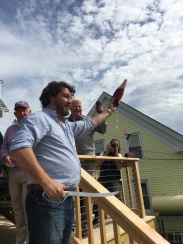 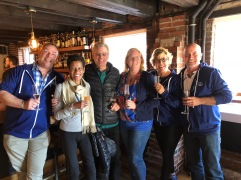 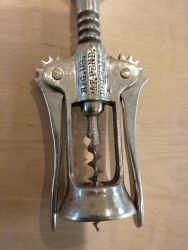 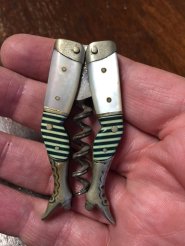 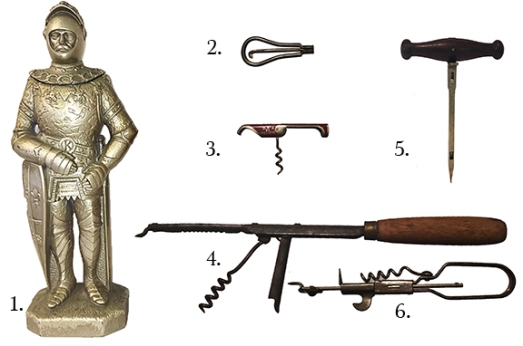 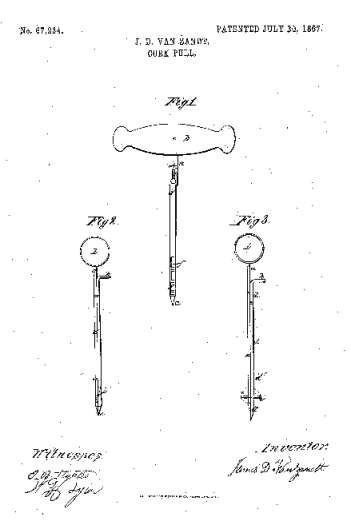 “The operation is as follows:  The cork-drawer being in the position indicated in Fig. I, it is forced down into the centre of the cork until the swing-bar has been pushed beyond the bottom of the cork, when, on drawing up the cork-drawer, the friction of the cork on the sliding prong d causes it to descend, b which the swing-bar is placed in a right-angled position to the prongs, and the cork follows the instrument as it is drawn out of the bottle.  The cork being drawn, it is easily disengaged from the prongs by sliding back the prong d by means of the thumb-piece and drawing it off, when the cork-drawer is again ready for use.”

Yesterday, I was going out about my usual business, and decided to take a quick break and check out what offering might have turned up on an online selling website.

And, what should appear but a listing for 5 antique corkscrews…

The  corkscrews were pictured individually, and the first one was interesting enough, but not worth the asking price. 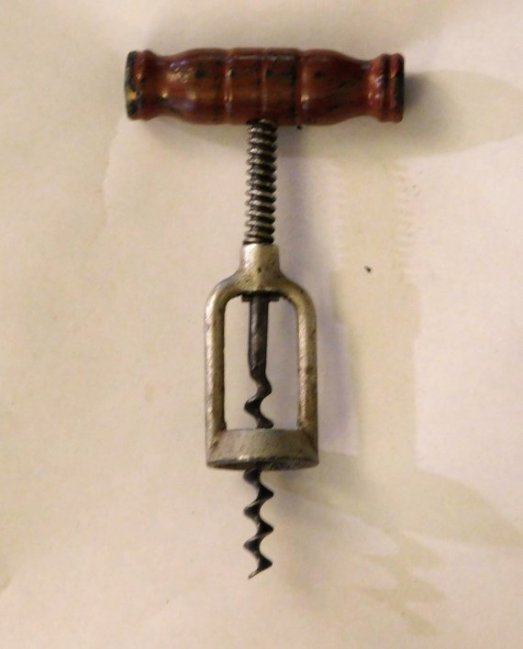 I clicked to the next photo…

I clicked to the the third photo. 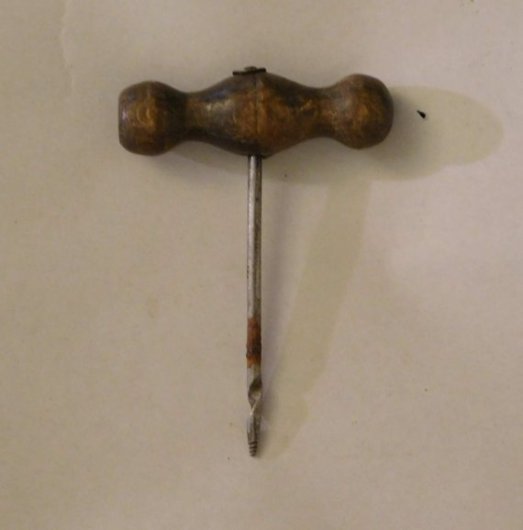 Okay, this is not looking remotely worth buying…

I clicked to the fourth photo. 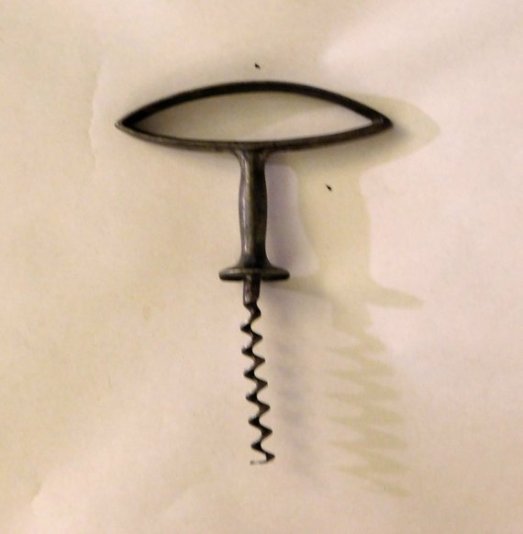 One out of five, certainly isn’t bad.  Especially when it is a Frary corkscrew!

I will compare it with the others in the Frary collection when it arrives in the next day or so.

If it is a different variation, it could make the best 6 of the year!

Mr. L. C. Mumford, of San Francisco, Cal., has devised a cork extractor, shown in Fig. 8.  It is made wholly of spring sheet metal.  Its construction, as well as the manner of using, will be readily understood by reference to the engraving. 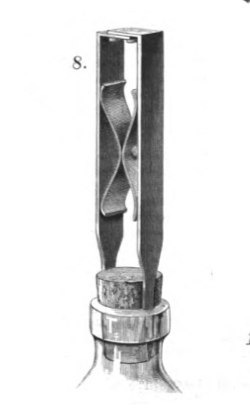 Do any of you have the 1879 version of this cork extractor?

The Rhens Mineral Springs, of Rhens on the Rhein, have received the highest distinction at the World’s Fair in Chicago—Medal and Diploma.  The exhibit of Rhens Mineral Water is thus described:

The Rhens Mineral Springs have displayed their products in a most distinguished manner in the German section of the Horticultural Building, in a handsome kiosk built of natural polished oak and plate glass sides, in pure and graceful renaissance style, with simple but ornamental decorations containing a pyramid of the various kinds and sizes of bottles and jugs which Rhens Water is supplied.  The labels on these original containers are alternatively printed in many languages thus prominently call attention to the vast extent of the business, which extends to nearly all civilized countries of the world.

In the panels of the base of the kiosk, the exhibitors framed numerous excellent photographic views of their establishment.  The springs with the beautiful surroundings Rhein country, the bottling rooms and their machinery hall, thus graphically illustrating the immense proportions of their business to the sightseer.

The little spaces on the ledge of the case were filled with lithographed pamphlets for free distribution, in which the valuable medicinal and dietetic properties of this excellent table water are set forth in terse language, supported by statistics, analyses, and endorsements of distinguished origin.  The exhibit was a perfect little gem.  Well-planned, perfectly prominent advertisement for Rhens water, which has so quickly achieved great popularity in the United States during the past few years.  The importations of the water to this country last year exceeded a million bottles and jugs. 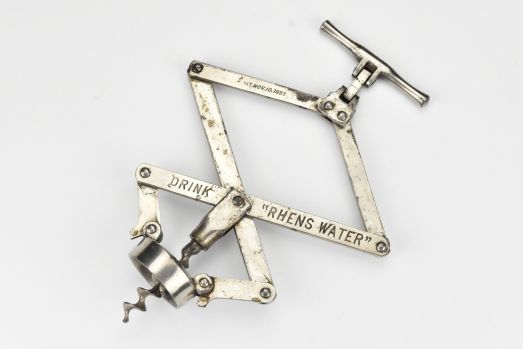 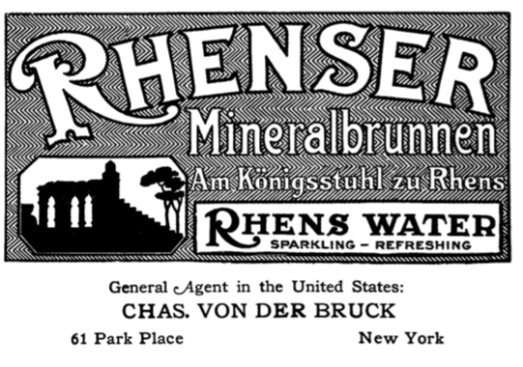 The other day, I was perusing eBay, and someone had for sale an interesting folding tool.  It had some patent information on the piece, but it was hard to make out–the seller explained.  And, it had a name engraved into the piece as well.

And, since it was cheap, I purchased it.

I am always up for a challenge in figuring these types of mysteries out.

I will add here, there was no corkscrew attached.

It arrived yesterday morning, and after a bit of sleuthing, researching, and some more researching, I managed to find the patent.

And, there is a twist to this mystery tool.

The tool is marked both for an 1877 patent, as well as a 1880 patent.  And, within the patent description for the 1880 patent there is an interesting paragraph, which reads as follows:

This invention relates to improvements on the patent for finger-nail cutters granted to Richard W. Stewart on the 22d day of May, 1877, No. 190,989; and it consists of a spring handle made in two separate parts that are held rigidly together at one end and capable of a lateral expansion at the opposite end, by which arrangement I am enabled to secure a folding tool in each handle—as, for instance, a finger-nail cutter and cleaner in one end, similar to the one shown in Stewart’s patent above referred to, and a button – hook, corkscrew, or other suitable pocket – tool in the other end

The patentee was suggesting that instead of a button book, a corkscrew might be the tool attached?

Well, if we have found the patent with the button hook, was the corkscrew version produced?

Do you have this little tool in your collection?

This is the  McDonald patent of 1880 for a “Toilet Implement.”

Now, let’s find the 1880 McDonald with a corkscrew! 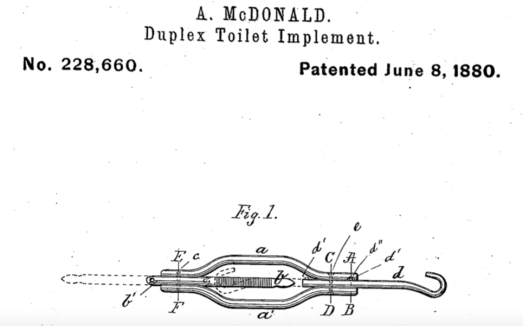 The lovely personal trainer was headed off to California early this morning, and so it was an early wake up call, and after heading down to make coffee at 3 am.  I did a little teaching online, and grabbed the first cup, with the coffee maker having fulfilled the task at hand.

A bit later, I grabbed a second cup, and went back to my laptop; this time checking the usual sites for any interesting corkscrews.

Nothing on eBay of note, and I went back to teaching.

Sometime close to 4, I delivered a cup to the lovely, and headed back downstairs to “my office” (which is not really an office, it is simply a couch with a cup of coffee nearby) where I came upon an interesting listing on a non-eBay site, for a pair of legs with mother of pearl upper scales, with stripes on the lower.

The asking price was fair, and in short order a deal was done.

This morning, it looks like, the early bird got the worm! 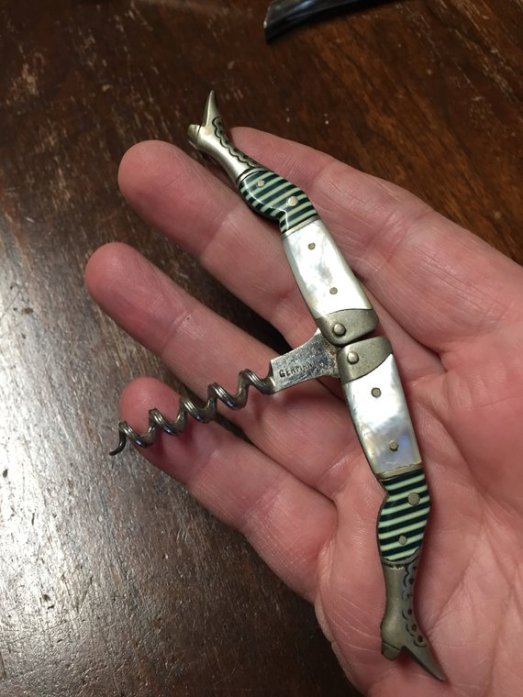 Tis that time of year, when corkscrew collectors start to consider what corkscrews will make the best 6 of the year.

And, while I certainly hope that something comes my way that alters my decision entirely, I have narrowed the list to 12.

Of course, you are welcome to weigh in on this, but here are the dirty dozen.

The official word is out, Robert Leopardi is the newest member of the International Correspondence of Corkscrew Addicts! 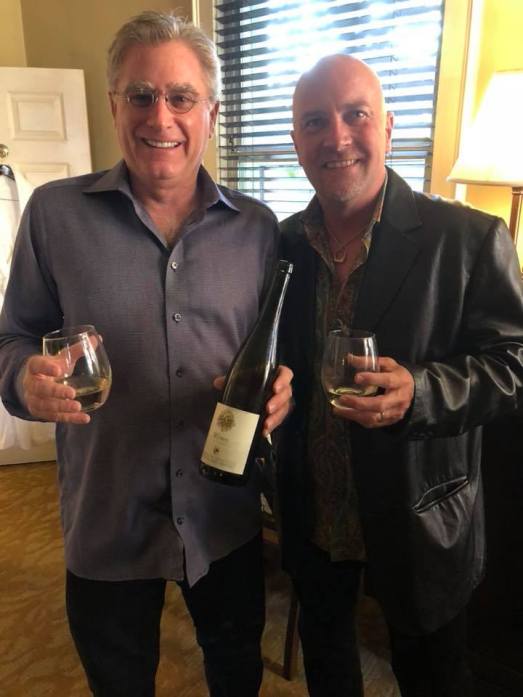 Congratulations Robert! Welcome to the club!

We will raise a glass (or several glasses) in Lofoten!

As is tradition, you are responsible for the first couple of rounds : )