This article which is represented in the accompanying illustrations, embodies, it will be observed, new features in a cork extractor.

It is represented in Fig. 1, while its use is indicated in Figs. 2 and 3.  From these illustrations it will be seen that it consists of a piece of steel bent and handled in the form indicated.  There is however, along the back a groove, which is not clearly shown in this cut, this groove being intended to permit the air to enter the bottle when the extractor is in place, thus overcoming the suction which is countered in drawing the cork the usual way.  As indicated in Figs. 2 and 3, the extractor, the end of which is rounded as to conform with the inside of the bottle neck, is inserted between the cork and the bottle, and when sufficiently far down the hook on the end is turned into the cork, placed direction under the end of the cork which may then be extracted.  It is obvious that in the use of this article the cork is not as liable to be injured as with the ordinary corkscrew, and it is referred to as doing its work efficiently.  These cork-extractors are made in eight different sizes and styles, giving a requisite variety for the different uses for which they may be required.

We have three different versions within our collection.  Two different sizes, and the folding Greely (found in a tray of button hooks in Florida).

I know that John Morris has an example that has a hole for one’s finger.

I will add here, that in other literature from the time explains that the Detroit Cork Screw Company was making the Greely Cork Extractor, and I wonder if that could explain John’s other find.  The folding Greely bow, with the patent date, but with a helix instead of the hook cork extractor. 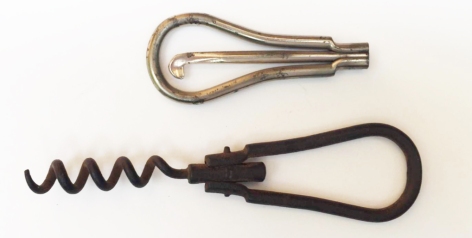 So, let’s see if there are any variations within our respective collections.

Grab a measuring tape, or ruler, and go check your Greeley’s.   Do you have other sizes of configurations?