From the publication: The book of household management : comprising information for the mistress, housekeeper, cook, kitchen-maid, butler, footman, coachman, valet, parlour-maid, housemaid, lady’s maid, general servant, laundry-maid, nurse and nurse-maid, monthly, wet, and sick-nurse, governess : also, sanitary, medical and legal memoranda : with a history of the origin, properties, and uses of all things connected with home life and comfort. 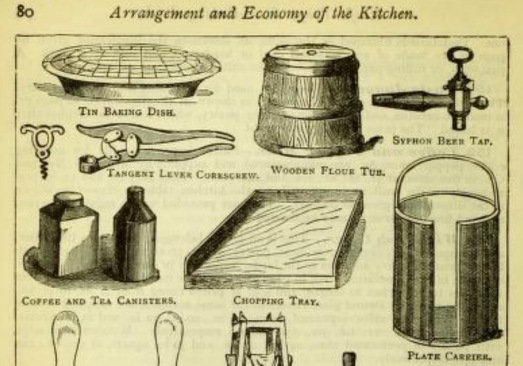 174. Corkscrew. –a good corkscrew is necessary in every household, and the Tangent Lever Corkscrew, illustrated in page 80, possesses manifest advantages over the ordinary corkscrew, especially for the woman’s use. The screw is twisted into the cork in the usual way ; the socket at the end of the lower arm of the instrument is then placed over the top of the neck of the bottle and the curved projection, which terminates the upper arm, through the hole in flat piece of metal to which the rom or screw is attached. By exerting pressure on the thin end of the arm, which acts as a lever, the cork is withdrawn from its position, and lifted out of the neck of the bottle.  The price of the Tangent Lever Corkscrew, complete is. 4d.  Extra screws may be had at 6d, each.  The Rack Lever Corkscrew, in bronze, at 4s. 6d. and 6s.6d., or in polished steel at 11s. 6d. : and the Thumb Lever Corkscrew at 5s. 6d. or 7s., nickel plated, are excellent corkscrews, by which the most obstinate corks may be drawn without trouble or exertion to the drawer.

I will preface this by saying, if you are going to hire an engraver, you might want to be sure that they know how to spell.

The Manufacture of Ballet-Corkscrews corkscrew arrived the other day, and while there are a couple of hairlines to the celluloid, the corkscrew is pretty fantastic.

Although, in looking closely (really closely) at the writing across the advertising plates it looks as if the piece is marked CORKSEREWS rather than CORKSCREWS.

Now, clearly they had a C nearby, as CORKSEREWS starts with a C, and MANUFACTURE also has a C.

And, as they got to the end of the plate, knowing that were trying to make CORKSCREW (or more aptly CORKSEREW) plural, but were running out of room, the S is a bit smaller, but they still made if fit. 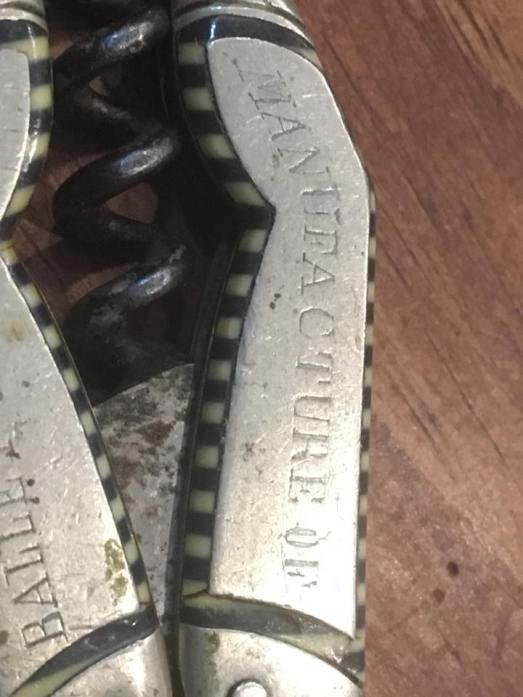 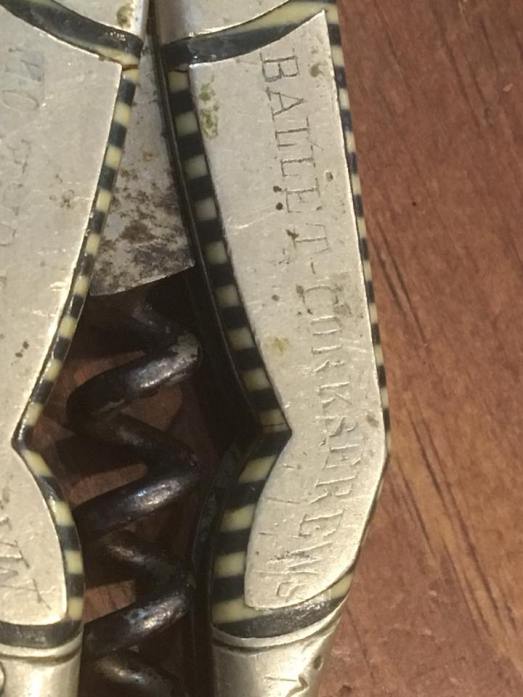 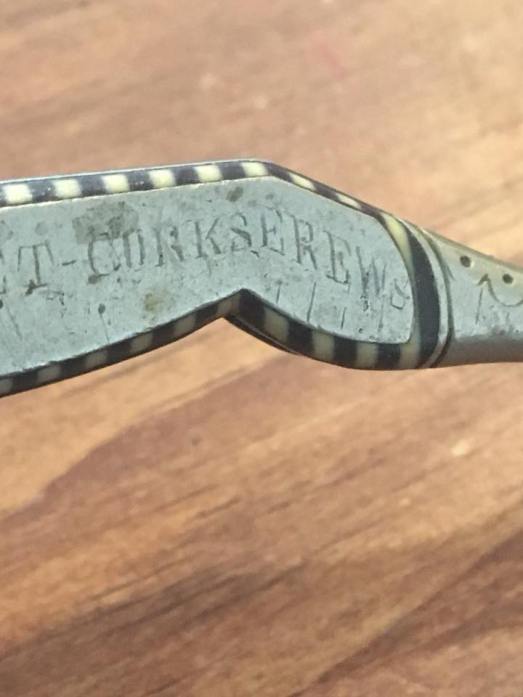 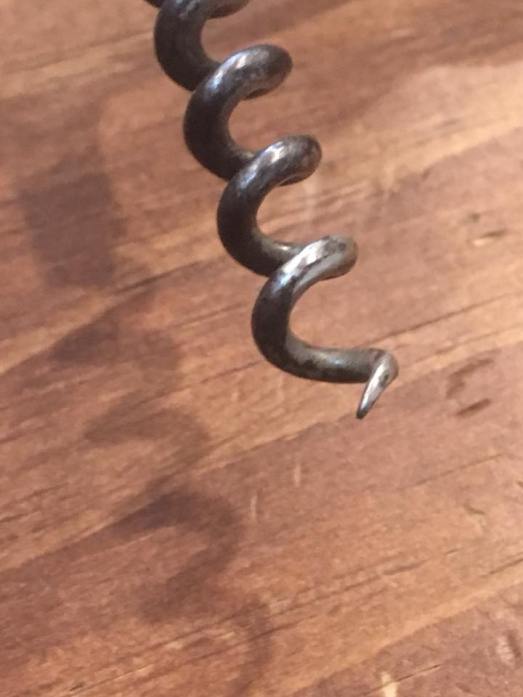 Even with the replacing the C with an E, the corkscrew is pretty darn awesome, and has the potential of making the best 6 of the year.

I have yet to clean the shank of the helix up yet, but it does look to have a maker’s mark. I will report back here once I figure that one out.

It is early in the year, and there is much hunting and collecting to take place, but over the last couple of days a deal was struck for a cork puller that easily will make the best six of 2018.

If over the next 12 months, I manage to find 6 pieces that are rarer, and it doesn’t make the list, well…that would be a good problem to have.

As mentioned in the past, I spend lots of time looking at O’Leary’s tome on American patented corkscrews.  And, while I haven’t memorized every patent drawing in the back of his book, there are some that I indeed have.   Still, only going by a patent drawing isn’t really enough.  From drawing to manufacture things can change.  So, it really really really helps, when suddenly you are presented with a previously yet discovered cork puller that is clearly marked with a patent date.

The question of who?, what? when?,  is that really what it was intended for?, is answered pretty quickly with a quick  glance in the back of O’Leary.  This, of course, is often followed by visit to google patents.

Now, this very well may exist within another collector’s collection, but given it isn’t in O’Leary (at least the front) and given that it has yet to appear in any of the patent updates, I will say “new discovery.”   If it has been previously found, I will happily say, “it is a rare thing.”

“So, what did you find Josef?”  You are asking yourself

Ladies and gentleman, I present to you, the 1867 James D. Van Zandt patent for an Improved Cork Pull. 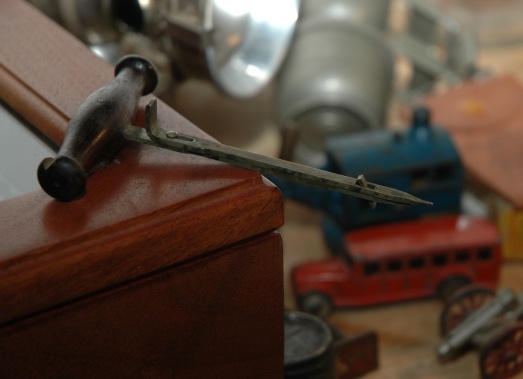 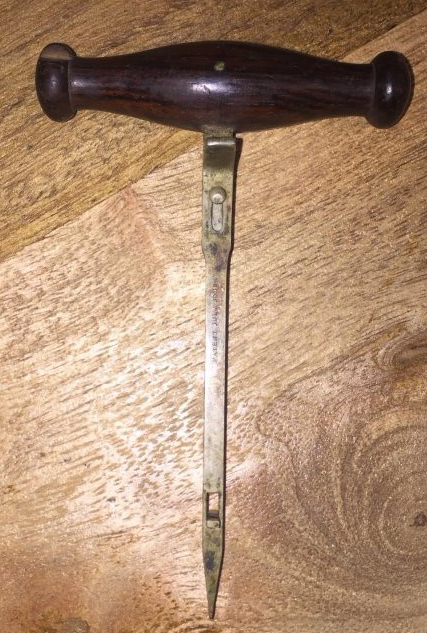 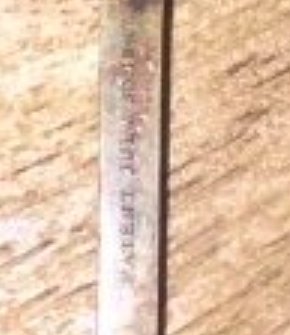 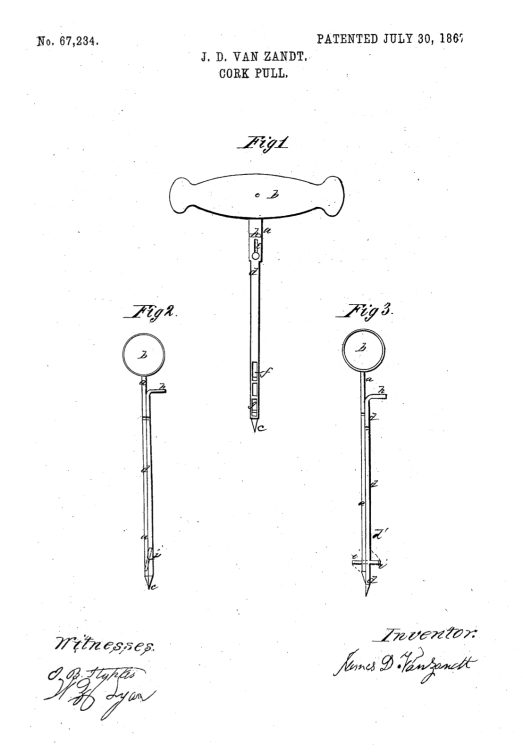 And, after checking on Google Patents, found even more…

“The operation is as follows:  The cork-drawer being in the position indicated in Fig. I, it is forced down into the centre of the cork until the swing-bar has been pushed beyond the bottom of the cork, when, on drawing up the cork-drawer, the friction of the cork on the sliding prong d causes it to descend, b which the swing-bar is placed in a right-angled position to the prongs, and the cork follows the instrument as it is drawn out of the bottle.  The cork being drawn, it is easily disengaged from the prongs by sliding back the prong d by means of the thumb-piee and drawing it off, when the cork-drawer is again ready for use.”

The Improved Cork Pull will arrive in a couple of days, and I will add better pictures when it does.   Definitely a Best 6 candidate!  And, a fantastic addition to the collection.

In the meantime, the lovely and I are heading to Vermont for a quick getaway tomorrow… could the best 2 or 3 of 6 of 2018 be found in our adventures?

As mentioned yesterday, the Voigt Brewing Davis is a new discovery.  But, given that I have quite a few Davis/Detroit and Puddefoot/Detroit corkscrews with advertising, brewery and otherwise, I decided to revisit the JFO handbook listings to what other advertising was out there.

And, it looks like there is some more hunting to do… (the ones in bold, I do already have…)

COMPLIMENTS OF THE GREENWAY BREWING CO.

THE VOIGT BREWERY LTD. DETROIT, MICH. U.S.A. “DRINK RHINEGOLD” (will soon be added to the handbook). 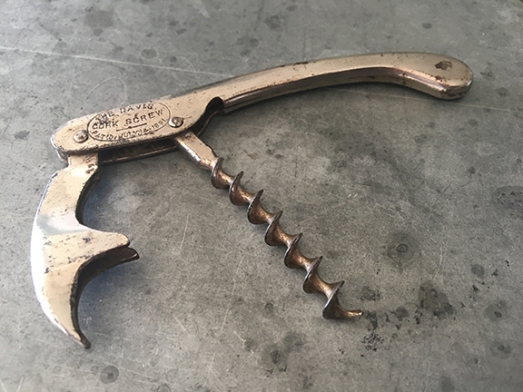 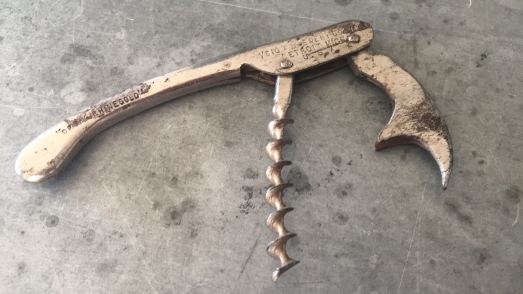 With the variations in advertising, you might want to check your Davis corkscrews to see if you have one that isn’t on the list.